I was just browsing through CES 2015 videos on YouTube today and enjoying my coffee while watching them. All of a sudden, accidentally I came across something surprising that I almost forgot the fact that I had been sipping hot coffee continuously for minutes and that my tongue was burning. “Project Christine”, a Modular PC Concept Design by Razer, was showcased at CES 2014. Another gadget that picked my interest was the Forge TV, made by the same company. So, in this article we’ll be covering some stuff related to those two tech innovations.

Above is the image of so called, “Project Christine”, by Razer. You may be confused, seeing what the blocks are and what’s their in the middle holding these blocks together? Those blocks are ‘modules’ that consists of different components of a PC. The one holding these modules is called the ‘tower’ that juices up these components. You can detach and re-insert these modules anytime you want. Each module consists of different components like the RAM and the processor make one module, the GPU has a separate module, the PSU and the cooling both are part of one module, etc. There can be 3 GPU modules at the same time. If you are not satisfied with any module that you feel like is not necessary, let’s say, your Blu-Ray Drive, you have right to replace that module with the one having an SSD. Isn’t that cool?

The whole setup uses, “Mineral-Oil Cooling Technology”, to stabilise the heat. The bottom portion of the tower acts as a reservoir of mineral oil. This mineral oil is transported through valves in the tower to each and every module through some sort of circular ports. Likewise, the design seems to be completely futuristic. To be frank, you will actually feel like it’s alien technology. The modular concept used in this rig proves to be of great advantage when you want to upgrade your components. Even a novice, who doesn’t have any idea of building a system, will be able to set up the components with ease. On top of that, the setup has the potential to provide you with extreme gaming performance. But it has been a year and there hasn’t been a single word of a release date yet. This kind of concept has the ability to enhance the technologies used in PC Gaming today, by leaps and bounds.

Oh! Did I forget to mention that you get a touch-enabled control panel on the tower too? Well, with this panel you get a friendly UI that can help you choose different kind of operating systems. It also shows you the details of your system in the form of pie-charts, blue-prints and graphs mainly showing the components and the performance exhibited by the system. But for now let’s shift our focus to the present, i.e the Forge TV. 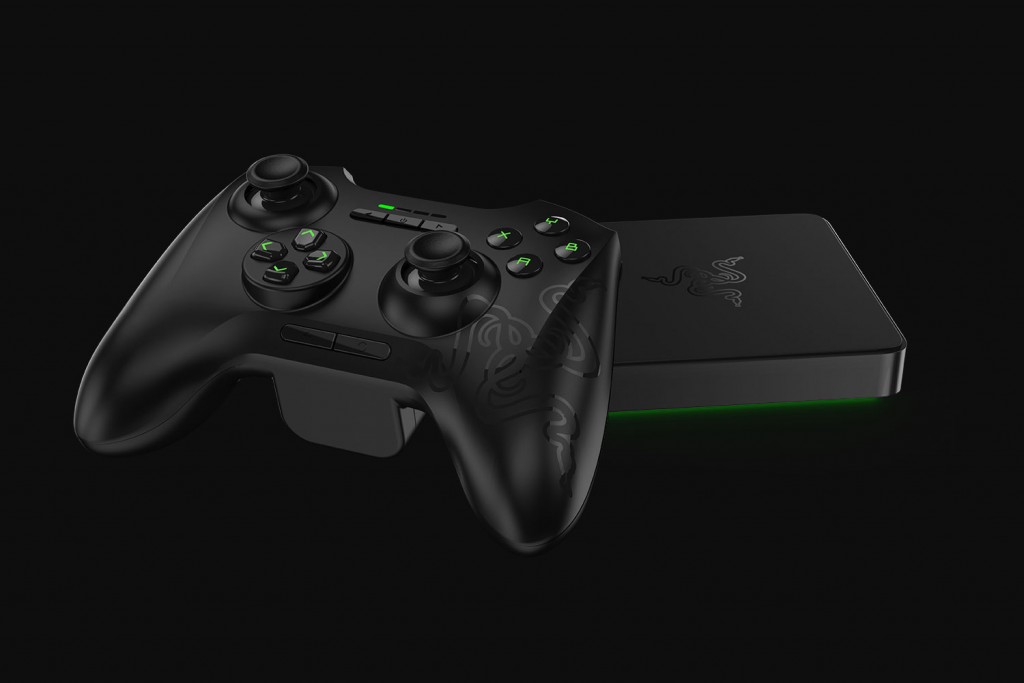 The Razer Forge TV is a mult-entertainment console that can make your living room alive with its awe inspiring and cool features. So what do you get with the Forge TV? What is it exactly? Well, it is your general multimedia console, powered by Android TV, especially designed for Android Gaming. That doesn’t mean that the graphics would be ‘mediocre’…it is gaming grade and I can assure that you will love it. You also get an Xbox like  bluetooth controller, ‘Razer Serval’ that will get yourselves hooked to the screen, designed for smooth gaming experience. The console can at max support 4 controllers.

You can even plug your smartphone to the controller and use it to play games. Furthermore, you can integrate your Android device to the Forge TV and can also use it as a controller. You can access Playstore and enjoy using surfing through different apps. Variety of entertainment apps are also available to enlighten your movie watching experience. The most surprising feature of The Forge TV is that you can stream PC Gaming on your Television screen. Not only can you stream from your PC but also any other device that you have in store. This feature is called the Cortex:Stream and it is awesome!!! Feel uncomfortable playing with controllers? Don’t worry as the Turret can provide you with the comfort of keyboard-mouse gaming. It consists of a keyboard and a mouse on a single tray. What’s more is the lapboard that supports the mouse, is magnetic and henc,e once you place your mouse on it, it won’t be detached easily, if you happen to tilt the turret by mistake.

The Forge TV was awarded with ‘Best of CES 2015’. Watch the video below to see for yourself what experience this device can offer: