Tech Legends
Home Games AC Syndicate: What And Why You Need To Know About The Shroud... 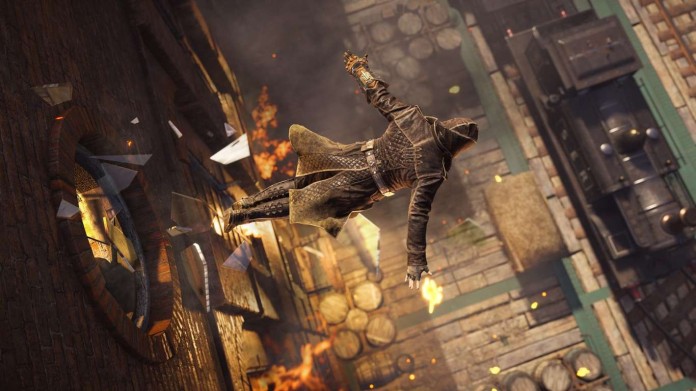 “I hope you never find the Shroud. You have no idea what it can truly do!”

You must be puzzled after seeing a statement mentioned above this para. The quotation mentioned in the beginning has been made by Lucy Thorn, a  British Templar, who you’ll encounter in AC Syndicate, all thanks to the assassination attempt made by Evie Frye. If you recall, an Evie Frye gameplay trailer was unveiled by Ubisoft around two months ago, that showcased this assassination quest.

It’s evident that the term ‘Shroud’ may have probably gathered your curiosity. We will answer all your questions one by one as we’ll be discussing in details related to the topic.

What is the Shroud?

Remember that the story of each and every Assassin’s Creed game was focused on the finding of various Pieces of Eden from First Civilization. Like, the Apple of Eden in Brotherhood, Masyaf Keys in Revelations, Sword of Eden in Unity and so on. Similarly, the Shroud of Eden is another artifact left by the First Civilization, which is going to be featured in Assassin’s Creed Syndicate.  It’s basically a linen cloth preserved inside a wooden box.

The Shroud has the capability to heal life threatening wounds in an instant and can also reanimate dead-bodies for a short amount of time. In other words, it has powers to make a dead-body, alive for a while!

The usage of Shroud dates back to the time of Brutus, the assassin responsible for eliminating Julius Caesar. The fellow assassins of Brutus tried to save him with the Shroud after his suicide attempt but they were afraid of using it for the first time and hence, failed to use it properly. Hence, the body of Brutus was live for a while but within a few seconds, it went back to its original state.

Perotto Calderon, a reputed Assassin, worked as a courier as well as an undercover agent in the Borgia family. However, he fell in love with the Templar Lady Lucrezia Borgia. She later gave birth to his son, Giovanni Borgia, in 1498. But the new-born baby was deformed and was expected to live only for a few days. Perotto, aware of the capabilities of the Shroud, fled at once to the house of Rinaldo Vitturi at Agnadello, who he knew was the keeper of the shroud. He did save the life of his son, but in this attempt he had to betray and kill the members of his own Brotherhood. For his selfish actions, he was later executed by the Assassins.

The most interesting thing actually happened with Giovanni Borgia. The boy although was healed, there were some lasting side effects he had to face, all thanks to the Shroud. During his childhood, he experienced the Bleeding Effect frequently, and hence could see the memories of people, who had happened to come in contact with the Shroud before. In addition to that, he had delusions of Consus, a being from First Civilization, which only he could see. After escaping from the Borgia family, the boy trained under the guidance of some reputed assassins like Francesco Vecello and Ezio Auditore. All thanks to the side effects developed due to the Shroud, Giovanni was later discovered by the Assassins to have the power of identifying and feeling the presence of various ‘Pieces of Eden’. Hence, he was later sent on a mission to recover another artifact from the First Civilization, known as ‘Crystall Skull’.

The Shroud later came into the possession of Niccolo di Pitigliano, a military general.  In 1510, a year after the Battle of Agnadello, the Assassin Francesco Vecello, was sent to assassinate and retrieve the Piece of Eden from him. Francesco successfully intruded Niccolo’s mansion and dealt him a finishing blow but the latter managed to heal by touching the Shroud just once and fled the scene at once. However, he was not in a condition to escape further and inorder to heal himself completely, Niccolo wrapped himself with the Shroud which only resulted in him getting shredded into pieces. Thus, Francesco successfully completed his assignment of retrieving the Shroud.

Shroud of Eden in Syndicate

So, by now you must be having a clear idea of what the Shroud can do and how important it will be in the storyline of AC Syndicate. Who wouldn’t want to posses such a powerful artifact?  The Assassins and the Templars, in Syndicate London, will be fighting each other for the possession of the Shroud. The same goes for the modern-day events as well. Sounds interesting isn’t it? Stay tuned for more interesting Assassin’ s Creed facts.