Tech Legends
Home Android Xiaomi Mi4 Vs. OnePlus One (On Edge of Comparison ) 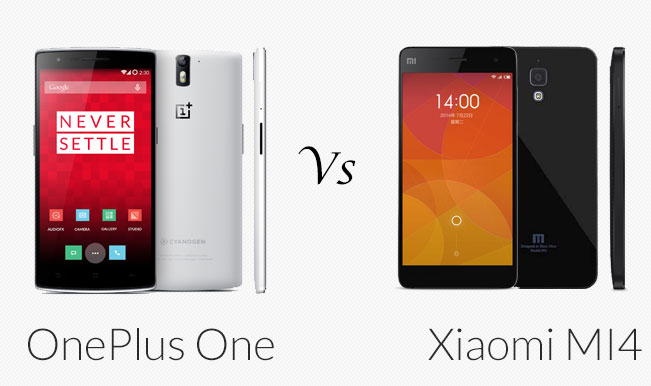 It’s been long that people actually stopped crying over not having a smart phone in their pocket, all thanks to the brands like Xolo, Micromax, Lenovo and the list goes on……now everyone is either worried about the price range or the specifications. Every other phone offers something new , something more exciting than before, and there are phones which confuses the users.YES ! They do confuse that ‘palm sized-brain’ of yours and make sure you scratch your head (doesn’t matter if you are bald). It’s hard to decide which is better, and that is when you come and read my blog and read this extra paragraph which doesn’t make any sense :P.

2014 has been a great year for smart phone business, and at the end of the year two new brands launched their smartphones, Xiaomi’s Mi4 and OnePlus One (FYI OnePlus is the brand name) . Both these phone did a great job to make people cry for them, and sales went really high when they launched, but now the question is, “If I have INR 24K in my hand which one of these I should choose..??”  Well that’s a tricky question, let’s check in this review if you find your answer.. 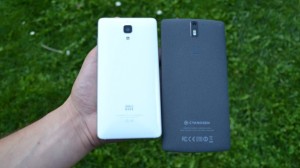 Both the devices are hell of a beauty if you consider their looks, though comparatively OnePlus One takes an extra point because of sandstone feel one it’s back, which gives is a premium look , and it feels way better to hold it. On other hand, Mi4 isn’t far behind but it’s plastic back cover does make it lower in comparison.

Another thing that comes in mind when you think of look is ‘Screen’ and ‘size of screen’..

In this comparison, I found Mi4 on high-end because it has 5″ display which is perfect for one hand use and makes it a lot comfortable to use, whereas if , “HEY I HAVE A BIGGER PHONE!”…then any guy/girl you will not have any issues with OnePlus one either, that comes with 5.5” display and will not disappoint you in other display factors.

It’s not just the hardware but also the software that matters, actually it matters more than hardware. Both these devices run on Android, however Mi4 runs MiUI 6, which runs really smooth and makes it worth for its price range, on other hand OnePlus one runs CyanogenMod , which is just greatttttttt. But unfortunately, it doesn’t provide any support in India(I know, shit happens!!!). So, which means that you will not be getting timely updates directly on phone, hence for time being adjusted with it, if not an issue then it’s good to go option.

For a phone to work fine, it needs a good combination of internal specifications, and these two devices are not just good but great in this comparison. Xiaomi Mi4 and OnePlus One both run on Snapdragon 801 chipset, and also are equipped with 3GB of RAM and thus, it is difficult to compare performance factor. They run on latest updates, however OnePlus One can be upgraded to Lollipop version .

These devices do give you option of an external SD card, but offer you enough space to manage your stuffs in internal memory. Mi4 comes in two variants 16gb(19k) and 64gb(24k) and OnePlus One comes with a variant of 64gb (22k). The company made sure that One shouldn’t face lack of internal storage issues. So, in this comparison it depends on user to choose over his required storage.

So, we are done with all the technical specs, what we think next is “how is the final output and what extra feature does this phone has?”. Both these devices give a good output when tested.

Both the devices offer you 13mp back camera, and they give a good detailed picture output , but when compared Mi4 does turn out to be slightly better than that of OnePlus One’s . Even on the front camera on one side Mi4 offers 8 MP camera whereas OnePlus one gives 5 MP, though results aren’t disappointing but Mi4 is slightly better than OnePlus One when it comes to camera quality.

Another factor is speaker which you need to think of because you are spending above 20k on these devices, so if compared on their speaker quality I would say OnePlus One gives better output as it has dual-speakers. But Mi4 has only one speaker in the bottom. 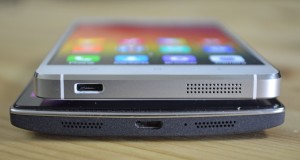 An additional feature which used to be there in olden days is added again in Mi4, that is IR blaster , you can control electronics like TV, AC and few other devices with infrared-blaster (pretty cool huh!!).

Last and the main feature is battery life, how could I forget it ???

Well, companies have kept this in mind while creating these devices, both of them give a good battery life, I mean really good battery life that makes it worth spending on them, so forget your charger issues for a while. And if compared both these devices give a run of more than a day easily, Xiaomi Mi4 gives around one and half day run but OnePlus One can stretch it up to 2 days of medium use…great right?

1. Better design, sandstone touch on back.

3. Battery life can be stretched up to 2 days.

5. Battery life is good and can be used for one and half day.