Are you curious to know what the remote is. First let’s go for a flashback to early 19th century where things were real simple and no complex actions were to be performed in different gadget releases. A remote with 2 or 3 keys was enough to adjust the volume and change the TV channel. So it may be called as simple or it lacked “technological innovations”.

But this remote called “SPIN” has thought out of the box and came up with a concept of making things simpler as before and also will help you become a lazier person. It is ably designed by its team.

The remote claims to ablaze your technological life where you could control every smart utility present in your home. SPIN is a central smart-control remote where you would have to use many buttons to achieve a task to be done, or you would just have to use natural rotation or touch.

SPIN remote connects your existing Infrared equipment to your smart home and it offers a perceptible interface to your smart devices. With this working mechanism you can just easily control your non-networked TV as you can dim your smart lights.

SPIN remote sends infrared signals in every direction so that you don’t have to pint your remote to your desired device. It saves the time for you to think and point and automatically senses the device to which you have set the settings for.

And you are just a touch away from activating this remote. SPIN remote also support macros(I/O sequences) which lets an user to control multiple devices at a time.

It is intelligent enough to learn from other remote devices by receiving and adapting their signals for more improvements. Do you have not-so-smart equipment which only talks via Bluetooth?? Then do not worry, it also supports to control non-networked devices which lets you easily control your normal devices.

This remote can act as a royal remote for users who have smart homes enables, like smart-lights, smart-fans and other domestic devices. For the users with smart-homes it would help them do every action with equipment’s by just sitting at their couch.

It Has Got More Features Than You Imagined!

SPIN remote is packed with sensors to detect motion, rotation, orientation and touch. You can even set it up to control your lights when held upside down. With the help of it’s sensors it can perform seamless tasks and transform your actions into commands which your desired equipment will understand.

The touchpad of the SPIN remote comes with a touch of fancy lights which makes it look more attractive. The touchpad is also configurable i.e it can be modified for performing different functions .For example to browse your TV guide or to control your Apple TV. 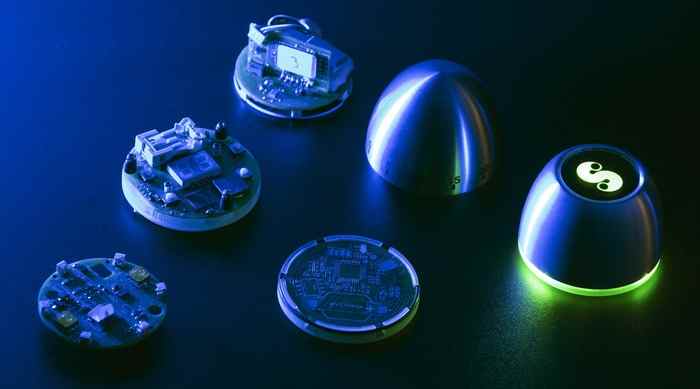 An App comes along your way by which you can customize your remote and also use your smartphone act as a universal remote (transfer of signals to SPIN and then to desired devices) , but the person whom you want to show this magic will not know that , actually SPIN does it 🙂 . Also the App doesn’t take any charges from you , it’s free !

The App makes it real simple to set up by which you can just read the instructions on the App and set the desired action into your command.