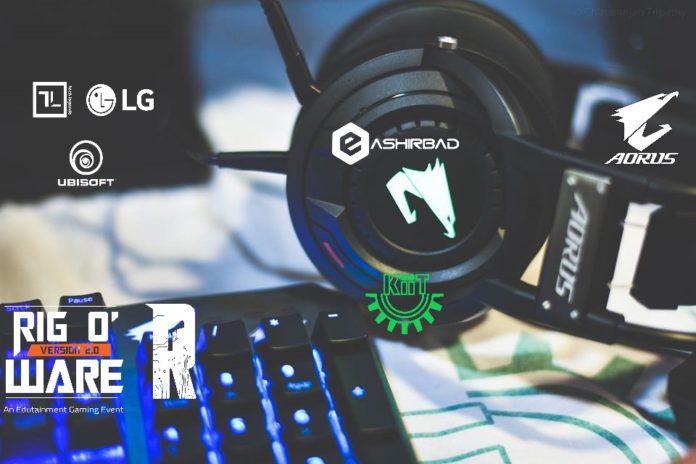 It was time for us to get back in action, and reignite the energy of the gaming community in the state. Last year, in Nerds United Con, we targeted gamers only. But this time, with Rig O’ Ware v2.0, our audience was twice its size comprising of non-gamers as well. Why non-gamers, though?

Rig O’ Ware v2.0, organized by Tech Legends, in association with Gigabyte AORUS (title sponsor), LG, eAshirbad & Ubisoft, highlighted the importance of gaming hardware in the field of education with a mix of it’s entertainment values. Moreover, this time, both Ubisoft Pune & France readily supported us for the event.

Especially relevant, we were very happy and fortunate, to have KIIT provide us with logistics, venue & accommodation support. The event was duly conducted on 24th March ’18, at Banquet-Hall, Campus-6, KIIT.

The eye-candy event featurette amped up with scenes from AORUS time-lapse build snaps, AC Origins and R6 Siege Gameplay, delighted the audience. You can watch the trailer for yourself, in case you missed it by visiting the link mentioned below –https://www.facebook.com/techl3g3nds/videos/1745985075424178/

With eAshirbad being tagged up as one of the primary sponsors for the event, people were wandering, what the entity basically is. Alas, it was finally time for answers. Mr. Rudrakanta Mohapatra, owner of Ashirbad Computers, took upon the dais and surprised everyone by launching eAshirbad.com. The firm happens to be a computer hardware retail entity based out in Bhubaneswar. As you can guess, eAshirbad happens to be the online store corresponding to Ashirbad Computers & Services.

Mr. Rudrakanta Mohapatra, owner (Ashirbad Computers), took upon the dais and surprised everyone by launching eAshirbad.com

Catering to the needs of gamers, hardware enthusiasts and general people with day to day IT needs, eAshirbad shall be offering products adhering to multiple brands, with the prime focus on AORUS (a gaming brand of Gigabyte) in the motherboard and graphics cards segment, respectively. The entity has been also named as the best partner for Gigabyte components in Odisha, and is the sole distributor for the same, in the state.

N.B: eAshibrad.com will be completely operational by April 5th

It was a great honour to have with us, Mr. Mayank Sharma (Country Manager, Gigabyte India), who gave an amazing informative session on DIY PC Building and various products, Gigabyte has in store. The products that he primarily educated about were, AORUS Z370 motherboards, 10-series Nvidia Graphics Cards, Gaming Chairs & accessories, newly introduced power supply units, and Gigabyte BRIX PCs (mini PCs).

It was a great honour to have with us, Mr. Mayank Sharma (Country Manager, Gigabyte India)

It was finally time for us to rig up and showcase live PC assembly. The session was well administered by Sourav Rudra aka Nova_Prime, who guided the participants that volunteered, for assembling the components. So, what did we build? Twas’ was a rig housed with the premium AORUS AC300W Chassis, consisting of an i7 8700k processor, AORUS GTX 1060 GB Graphics Card, Gigabyte GP-B700H SMPS, Zion Blaze 8 GB RAM and a WD Green 240GB SSD.

People inexperienced in PC assembly, were mainly called to volunteer. They were guided from scratch, and hence got to learn something new and exciting, for which we were very glad.

There were 10 PCs in total, catering to the gaming experience of the audience. The specs, as mentioned earlier, remained the same as that of the assembly PC. For the ultimate visual experience, we had 144Hz LG and BenQ monitors on display respectively. The AORUS M3 mice and K7 RGB/LED backlit keyboards, further augmented the look and feel of the premium AORUS rigs.

The games that were primarily on showcase were – Rainbow Six Siege, Ghost Recon Wildlands and Watch Dogs 2. 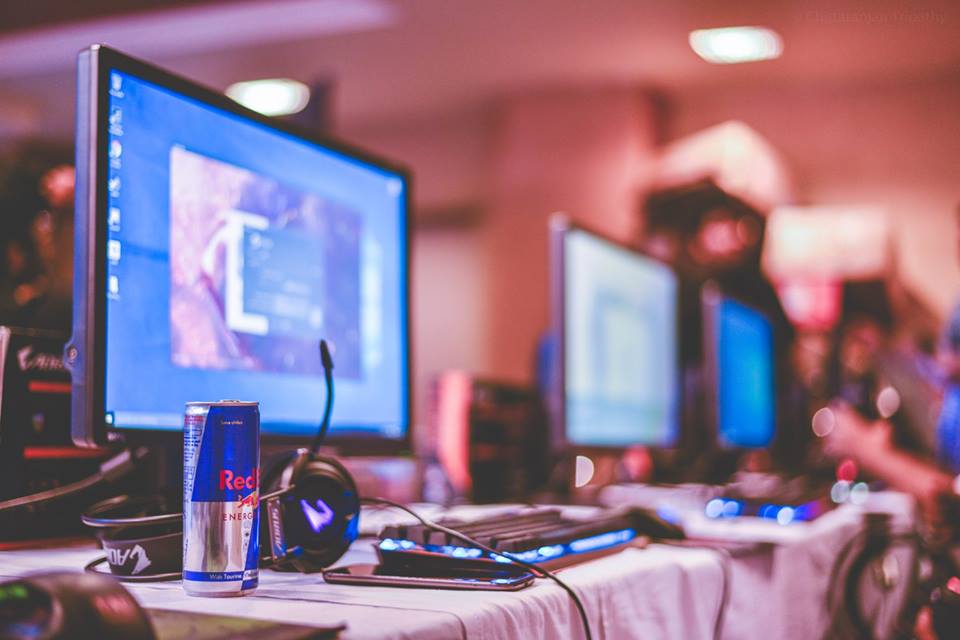 When the PC assembly session was ongoing, Anwesha Pradhan aka Cerinius, who cosplayed as Caveira (A BOPE Operator in R6), made an attempt to interrogate Nova_Prime & HackAssin.

The audience was stunned to see something spectacular out of the blue. Her cosplay was very much accurate which she further amped up by mimicking the silent-steps of the respective character.

“Interrogaccionn! Give me all the GTX1080s!” – were some of the amazing quotes made by Cerinius

It was an honour to have with us Mr. Avimanyu Bandyopadhyay, former Ubisoft Star Player (2016) & GPU-based Bioinformatics Research Scholar. The intellectual gamer, shared his research work, the present industrial trends corresponding to GPU programming and the respective career prospective. The audience was provided with a small insight to the advantage of GPU programming using Nvidia’s CUDA (Compute Unified Device Architecture) with live examples.

It was an honour to have with us Mr. Avimanyu Bandyopadhyay, Former Ubisoft Star Player (2016) & GPU-based Bioinformatics Research Scholar

One of the essential topics that he pressed on was Deep Learning using Nvidia’s current APIs available.

Finally, it was time to witness the R6 International Friendly between Team India & Team France. It was Team Domination that fought it’s way up to represent our nation in this breathtaking match. Three of their members, travelled all the way from Hyderabad to Bhubaneswar in order to rock the audience with their presence during the event.

W31RD & Ticky_Tocky did an awesome shoutcasting for the R6 International Friendly

Due to time constraints we had to wrap up the event as soon as possible, and hence, had to restrict the Friendly Match to a single map. The shout-casters livening up the scene, were Sarthak Bisoi aka W31RD and Aditya Chowdhury aka Ticky_Tocky. It was Team France that won the match by a score of 5-3. Nevertheless, India proved to be very challenging to the opposing team, and hence, the audience was really proud to see their nation battle competently.

Team France won the friendly with a score of 5-3

The overjoyed participants took many selfies and snaps, to make the event viral on social media. You can go through some of them below: 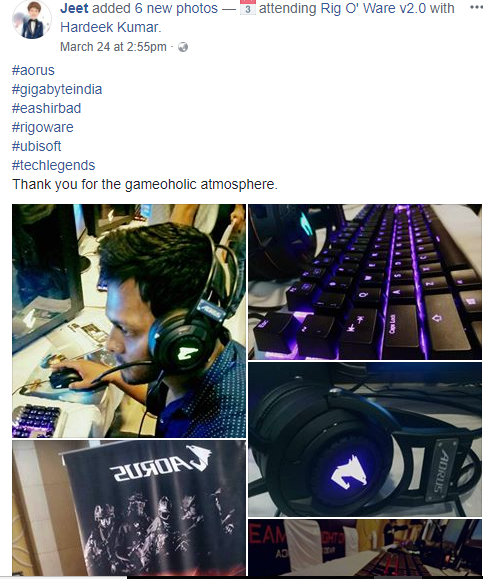 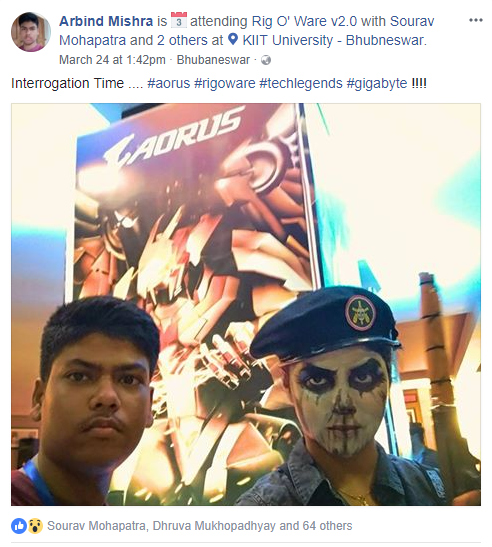 There’s definitely more to explore. You can refer the gallery to know furthermore exciting stuff and happenings associated with Rig O’ Ware v2.0.

Being the organisers for Rig O’ Ware v2.0, we would like to claim that the event could have been much better minus the external hassles namely livestream quality and power outages. We apologize for the inconvenience faced by both the online and offline audience.

In a short time-frame, we did what was possible from our side, and firmly believe it was not our best. But still we were glad to see the participants very happy with the experience that they duly got from our 2nd edition of Rig O’ Ware v2.0. We will definitely try to come up with more such events. Follow us on our fb page – fb.com/techl3g3nds, and stay tuned for more updates!