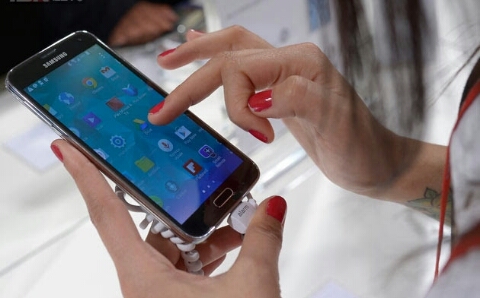 Samsung’s new S5 smartphone.  The company’s new flagship smartphone has lot’s of innovations, including water resistance, a heart rate sensor and a fingerprint reader . The screen measures 5.1 inches diagonally, which is slightly larger than its predecessor’s 5 inch. The S5’s camera is capable of taking 16 megapixel images, an improvement from 13 megapixels in last year’s Galaxy S4.

The heart rate sensor, located on the back just below the camera lens, doesn’t measure your pulse continuously. Rather, you have to hold your finger on the sensor for about five seconds before and after your activity. The information gets stored in Samsung’s S Health app. If you need continuous tracking of your pulse Samsung has three fitness-focused wrist devices out this Friday. They get syncd with the S5 and other Samsung phones to give you more details. Samsung also offers water resistance, i.e you can submerge it as much as 3 feet deep for up to 30 minutes. Sony goes for its latest Xperia phones up to 4.5 feet deep. With the S5, there’s only one cover to worry about, plus the phone’s removable plastic back. The S5 isn’t meant for underwater use, but The camera’s 16 megapixel resolution brings the S5 closer to what only CAMERA devices offer, though the megapixel count is just one factor.

The camera interface is simplified. The S5 reduces your choices or at least hides many of them. The S5 also promises a faster auto-focus, though it’ll take time to test that promise.The fingerprint reader is what excites most about the S5. To set it up on the S5, you simply swipe your finger over the home button eight times. You can do it with up to three fingers. It even works after handling oily indian snacks. The S5 goes further than the iPhone in letting you use your fingerprint to buy things at retail stores that accept PayPal’s mobile app. You swipe the sensor instead of entering your passcode.Your fingerprint can also be used to unlock a new, private mode on the phone. When you exit that mode, photos and other documents you designate as sensitive are hidden as if they never existed.Some people may be concerned about losing their fingerprint identity to hackers. Unlike passcodes, fingerprints can’t be changed. I can tell u that it’s optional, and you can still use passcodes the way you always have used.

Just like Apple, Samsung keeps the fingerprint ID in a secured part of the phone, so it never goes to any servers. When PayPal needs to verify an identity, the phone simply tells PayPal’s app about the match, without needing to send the print ID.Parents will also appreciate a kids mode filled with age-specific apps for each child. But to leave kids mode, all you have to do is enter a birth year that’s 2001 or before. The app is even helpful enough to tell the kid to pick an age older than 13.One area where Samsung phones still fall short is in their construction. Although the removable plastic back makes it possible to replace the battery, it comes across as cheap next to the iPhone’s glass back and the HTC One’s metal body as normally people like.

The S5 comes with the standard Google apps for Android.

The phone goes on sale Friday around the world, though a few carriers in Korea released it early. Through the major U.S. carriers, it will cost about $200 with a two-year service agreement or $600 to $660 without one.