Tech Legends
Home Games Fallout In Minecraft? – Here’s What You Need To Know 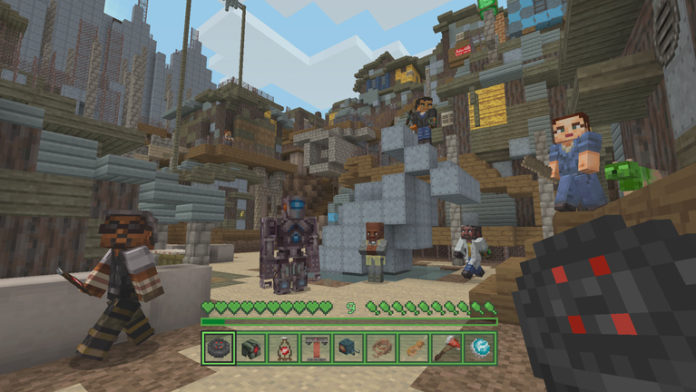 -“Another settlement needs your help. It has been marked on your map!”

Well, I guess Fallout 4 gamers can easily recognize the above quote. It really felt monotonous and horrible after hearing those words from Preston Garvey, that became an internet joke. Building and defending settlements eventually felt boring and most of us rather bothered completing other relevant quests.

Maybe those days are gone. There’s sundae treat coming soon for us as, Minecraft will get a mash-up pack dedicated to Fallout 4. Priced at $6, the new update will feature 44 character skins from the game. You will get to see friendly faces like Nick Valentine, Dog Meat and much more.

Most noteworthy, the add-on will feature a post-apocalyptic map depicting some war-ravaged structures like the Capitol Building. Be happy that Ghouls and mutants will be there to accompany too! To amplify your experience, the UI will get a Pip-Boy overhaul. Furthermore, you will get to listen to a playlist of retro songs too!

You may watch the trailer to know all about the update.

The Fallout-Minecraft addition will be out soon for consoles like PS4, Xbox-One, PS3, Xbox 360, PlayStaion Vita and Wii. Till then, stay tuned for more updates! Enjoy gaming and have fun!