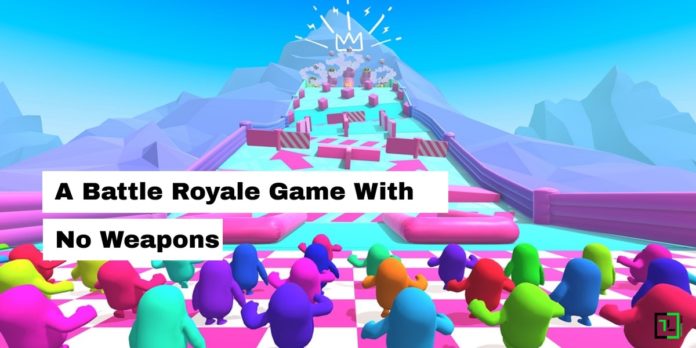 I assume that you must have experienced some of the best battle royale games (subjective though) available out there.

Well, there’s just a whole bunch of them if you want to pick a battle royale game.

But, what if you want a battle royale game without any shooting (combat) at all? No weapons? No killing?

“Fall Guys” is just the game you should be on the lookout for – if you’re tired of battle royale shooters. Developed by Mediatonic with Devolver Digital as the publisher, this is a unique take on Battle Royale genre.

Fall Guys was revealed at E3 2019. However, it didn’t grab our attention then – and I missed it too.

However, the recent post by gameindustry.biz made me curious – where they talk about the game with Jeff Tanton (Creative director, Mediatonic)

You should really check out their article if you want to read about the lengthy conversation.

Or, just continue reading this article to know about it in brief.

If you haven’t watched the trailer yet – you must be thinking what different could it be from other battle royale games. So, I insist you to watch that first.

Now, considering that you’ve watched the trailer, you must have realized that it is a battle royale game which looks incredibly fun and competitive as well.

The core idea was not to make another generic battle royale shooter game. So, they came up with an idea which involved no combat – but meant to be competitive.

There will always be shooters and we’re not looking those, by any means, but there is a huge group of people a competitive spirit but without having to master gameplay. Those games are difficult and challenging, and a lot you leave them as a new player feeling like you’re missing out .

There will be a single winner in the end. But, it’ll involve knocking out a bunch of players at once indirectly through a series of mini-games inside it.

You can already find it listed on Steam for PC and it will also be available for PS4. Pre-orders haven’t started yet.

What do you think about Fall Guys? Will you give it a try?

Let me know your thoughts in the comments down below.