-“I once thought I could save the world. Now I get it”

Can you guess who said that? Any idea? If you are a Deus Ex fan or you if you’ve played Deus Ex: Human Revolution before, it would be easy for you to guess. It is none other than the almighty heroic, Adam Jensen. Yes, he is back!!! Please try to control your excitement as Eidos Montreal just recently revealed the 1st official trailer of Deus-Ex: Mankind Divided, the sequel to Human Revolution, released in the year 2011. So, what’s it all about?? Let’s have a look:

Those who haven’t played Human Revolution before or don’t have any idea about it, should know that the base of the storyline focuses on the use of ‘Human-Augmentation‘ technology that leads to dangerous consequences: MNC’s rising to power that gives them the authority to control the Govt. virtually and hence, rule the mankind further leading to civil unrest. The story centralizes on the character, Adam Jensen (Chief Security Personnel of Sarif Industries), who is on a mission to save the mankind.

-“The world is different now. The old rules no longer apply”

The storyline of the sequel (Mankind Divided) is set in 2029, two years after the events of Human Revolution. Mankind no longer has the resistance to deal with the selfish policies of dominating global corporations and the corrupted Govt.Hence, it resorts to violence. The trailer showcases a Russian Criminal Warlord, leading a terrorist group, making several attempts to threaten the Govt. by destroying properties and lives of innocent people across various places of the world.

-“So much pain. So many lives. That darkness must end!”

Adam, the savior of mankind, takes a second chance to resolve things.

You take control of Adam, the same way as you did in Human Revolution, i.e from a first-person perspective. While switching to covers, the camera shifts to a third-person view. We don’t have much details about the gameplay but the trailer does show some upgrades to Adam’s gear and drones, completely new to the series. Let’s have a look: 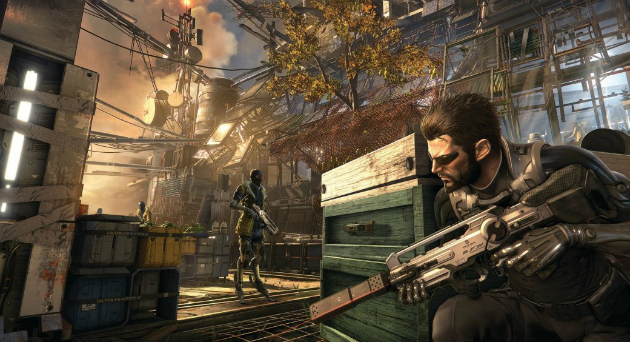 The visuals look stunning and seem to be seriously enhanced as compared to the graphics implemented in Human Revolution. We have to wait and see the real performance though until another official trailer is unveiled depicting the graphics used in the game. Like the last time, AMD will be mainly optimizing Mankind Divided for PC. But no official info has been revealed yet, related to the various graphical settings that will remain exclusive to AMD users. Bad news for Nvidia fans!

Deus Ex: Mankind Divided looks hot. Frankly speaking, the patience to play this game right now is completely unbearable. Infact, Eidos is yet to announce a release date for this game. But it’s confirmed that the game will be developed for Xbox One, PS4 and PC users.