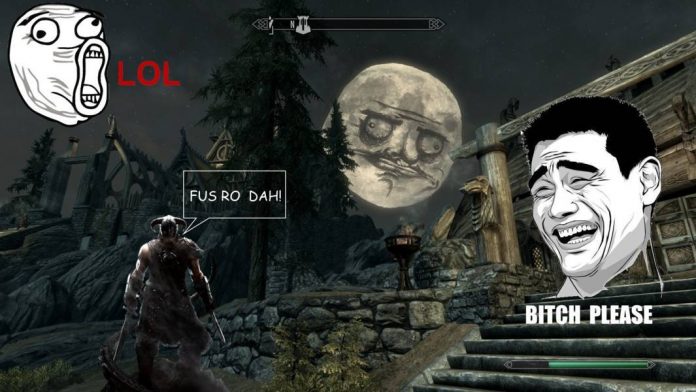 It has been a long time, isn’t it? No one’s talked about the Legendary Skyrim lately. Well, gamers, come let’s have some fun by revisiting this game. You know sometimes it’s good to go back to the old times and cherish them. In order to help you, we looked up your future in the time machine, in which you die laughing in the end, all thanks to the funny skyrim memes we have for you.

To be frank, some of them are from different sources, while there are also a few that we managed to make on our own. Supposedly, you haven’t played Elder Scrolls V: Skyrim yet, then it’s not an issue, ’cause you’ll still enjoy a lot. 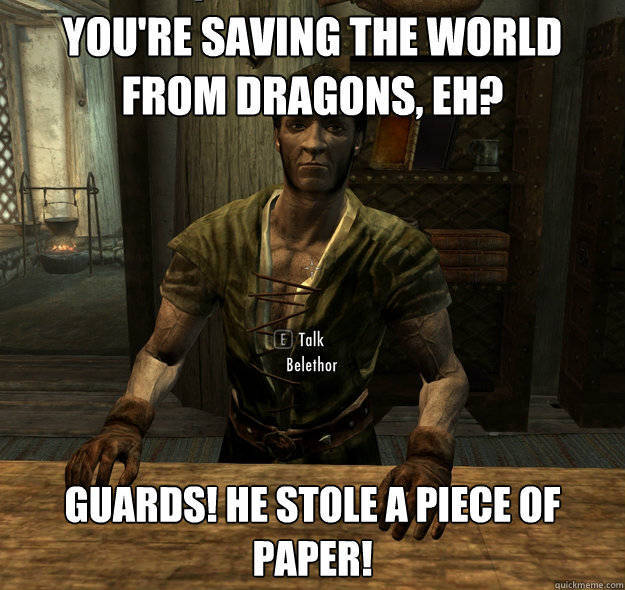 Looks like the store owner’s pissed off with the Dragonborn, the savior of Skyrim, who constantly keeps on fighting the mighty dragons. Apparently, as it seems, our hero may have stolen something from the general store. Lol… 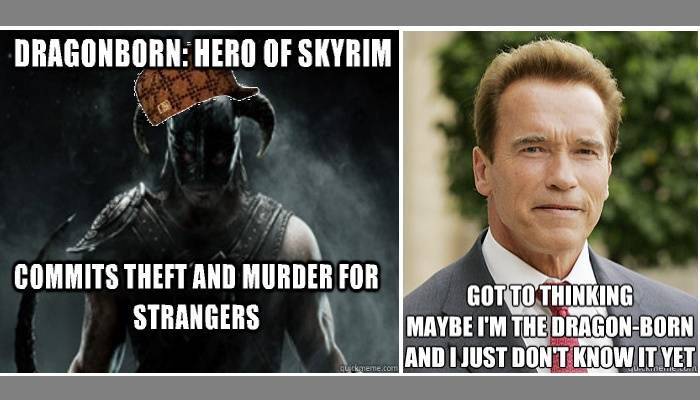 How ironical! The guy who fights dragons ends up committing theft and murders for strangers! So, what’s got into Arnold’s mind, eh? 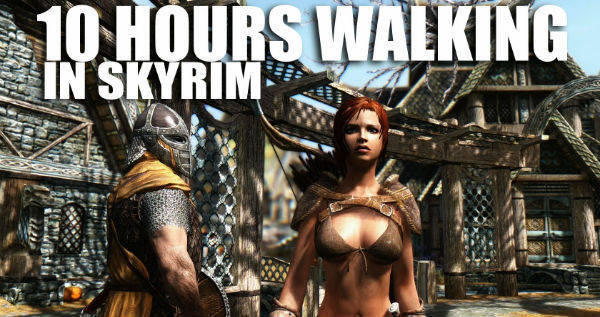 Oooh lalaalaaa! Hope you remember that you could also play as a female character in Skyrim. I just got this image while browsing the net, and judging the gamer who posted it, surely he did nothing but simply walking in Skyrim with this hot lady. So, his eyes were hooked on to the screen for…what? Do I need to tell? 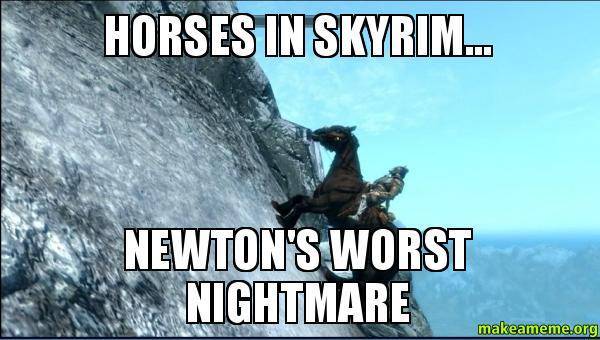 Dragonborn had a ride to the mountain! He was in a horse. Well, Netwon had a nightmare…..and asked, “How could he not fall?” 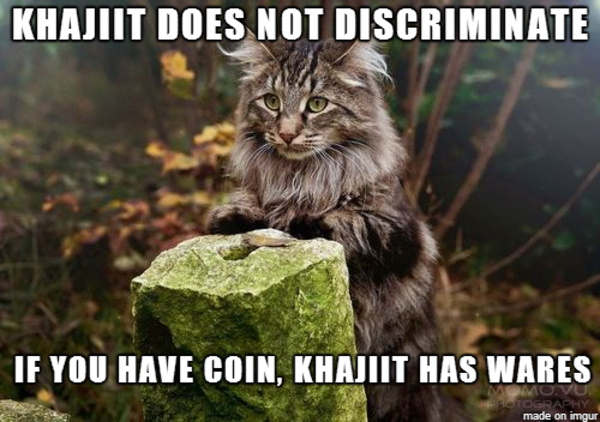 The nomadic people of Khajiit Tribe in Skyrim, the one’s where people look like cats, are best known for their business quality and service. That’s true, if you have coin then the Khajit has wares. Don’t worry, your cat could be the next Khajiit! 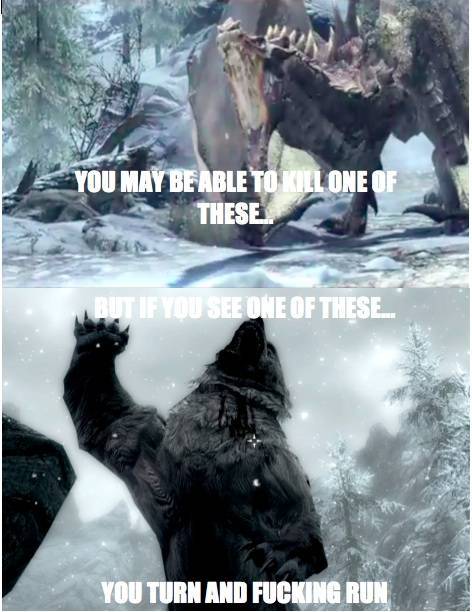 Well, it’s very common. Almost everyone did it! What? There’s nothing to be ashamed of! Lol, these hilarious Skyrim memes are mind blowing. 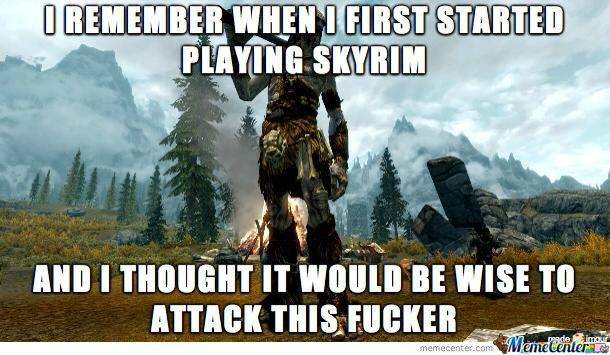 Yeah, even I did the same too. What about you? Let’s see what Boromir and the Giant have to say to us.

Gulp! There’s that! They warned you…so never dare to mess with them! 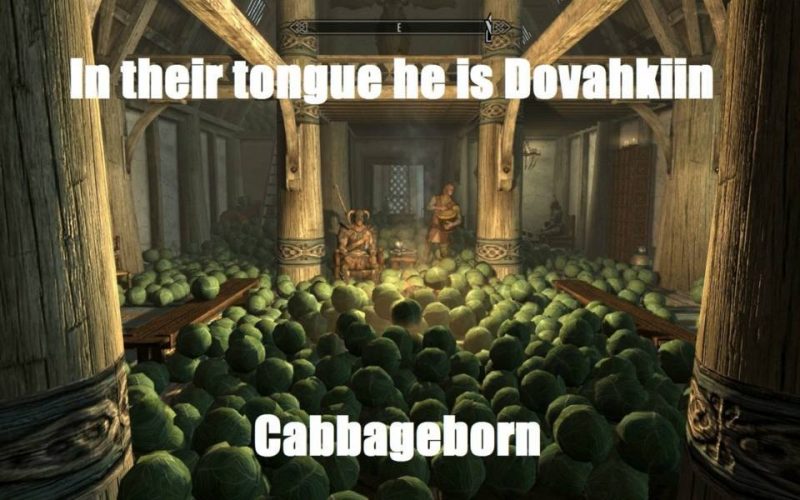 Dovahkiin! Couldn’t get it? In the ‘language of the dragons’, ‘Dova’ means ‘Dragon’ and ‘Kiin’ means ‘born’. But there seems to be something different here! 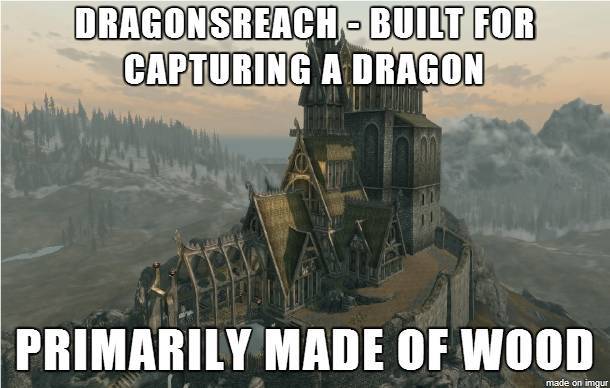 They should probably work on something better….lol! If you don’t remember then Dragonsreach, is a place within the city of Whiterun that houses the quarters of the Jarl and some of the important city staff. It was originally created as a dungeon to capture and hold the dragons. These Skyrim memes should be preserved! Well, they are treasure! 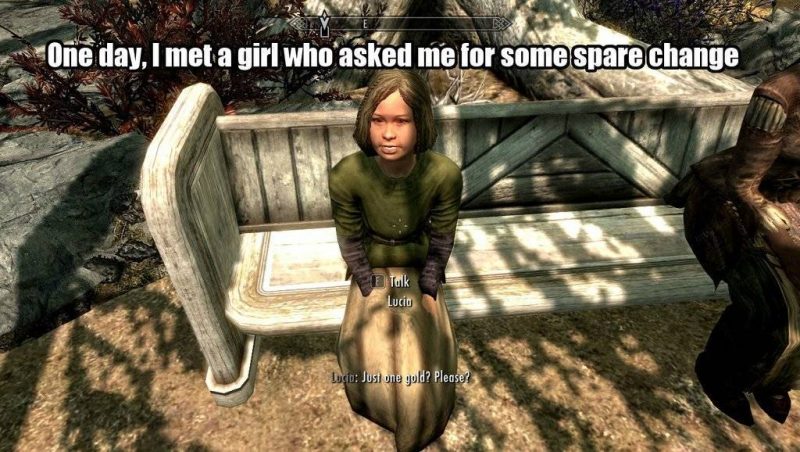 What? A gold coin? Nobody would even bother you to give a penny, you poor little child. 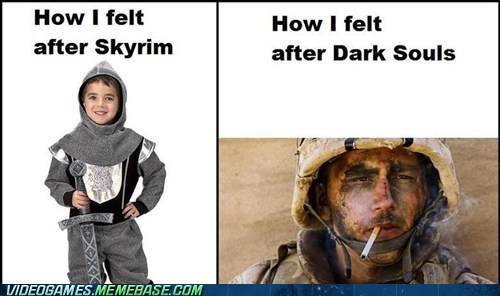 Yeah, that’s true…Skyrim seemed to be a lot easier than Dark Souls. Although, you can use some of the Skyrim console commands to make things easier in Skyrim. You couldn’t even last a single minute without proper equipment and gear in Dark Souls. 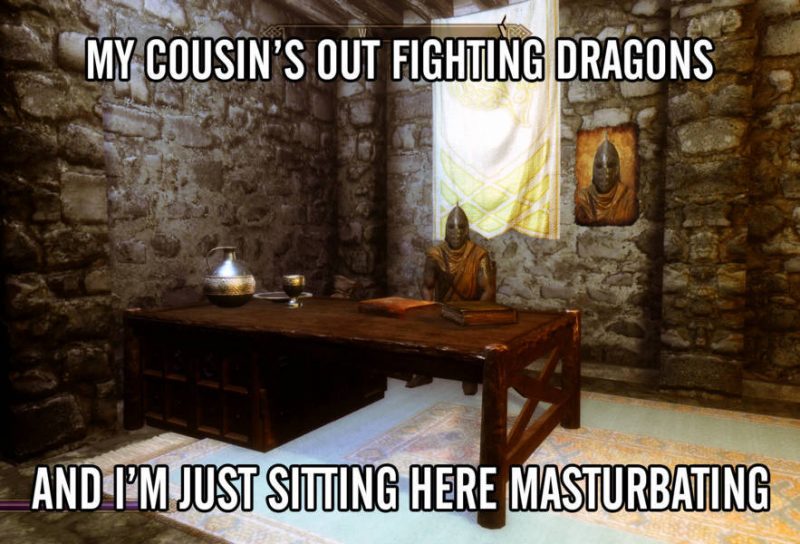 A thousand rounds of applause for this Skyrim guard! Finally, he grew up to become a man and actually, he’s doing the right thing! So, you better not disturb him. Remember? You’ve got dragons to kill! I think we should make a museum dedicated to Skyrim memes! 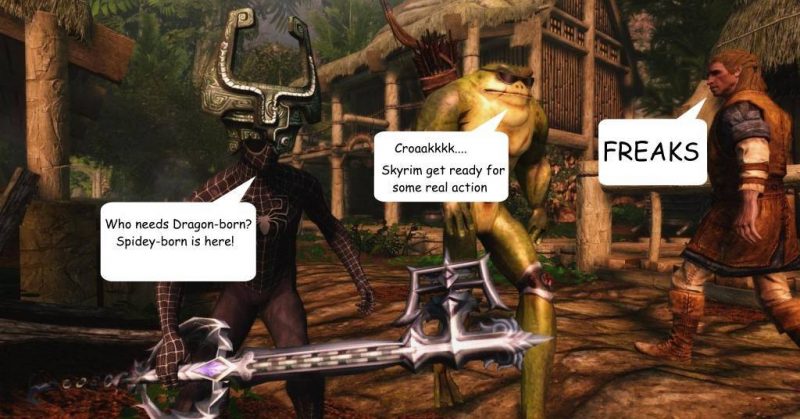 Lookie here…our special guest appearances in Skyrim, Spideyborn and the Froggie Dude. Well, they seem to be serious!

YOU MAY ALSO LIKE: Meet Shagufta Iqbal a.k.a ‘Xya’: A Gaming Freak

Alduin, the primary antagonist in Skyrim, scared the shit out of most people. So, what’s the trick to calm and kill him down easily? Guess, snickers would do 😛 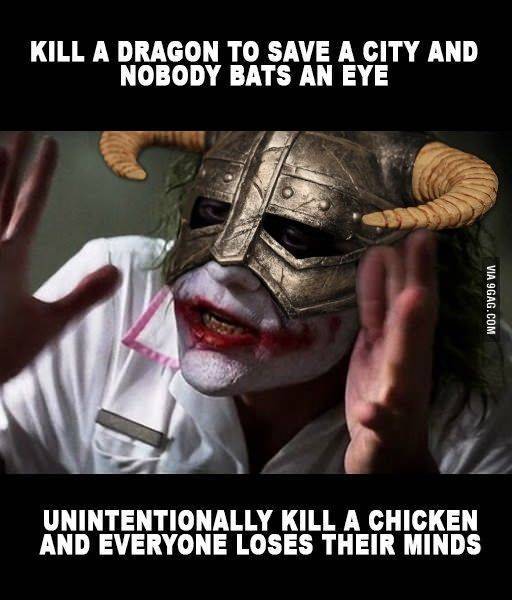 Yes, the Jokerborn is right! That’s happened with almost everyone playing Skyrim. 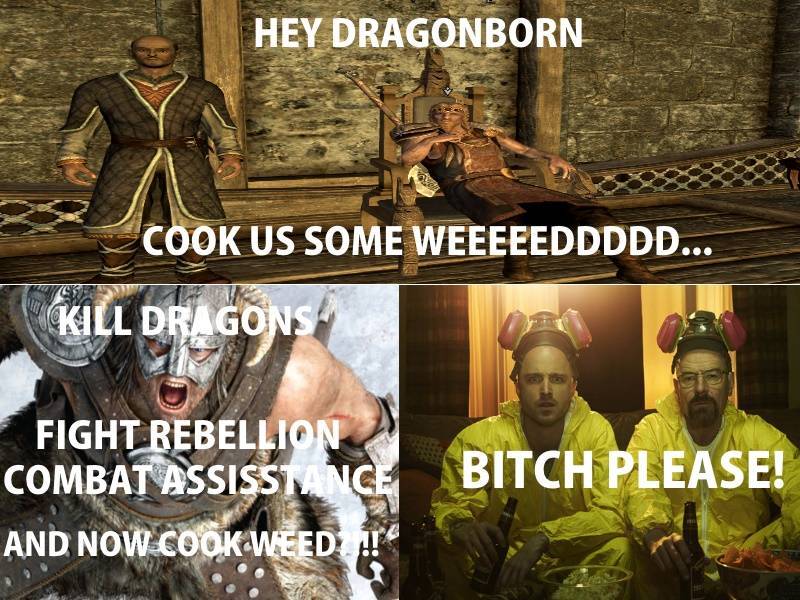 What’ll happen if someone asks the Dragonborn to cook some weed? You get Walter Whitman and Jesse Pinkman from Breaking Bad with the finishing quote! Jesus…the meth duo looks so funny and badass! 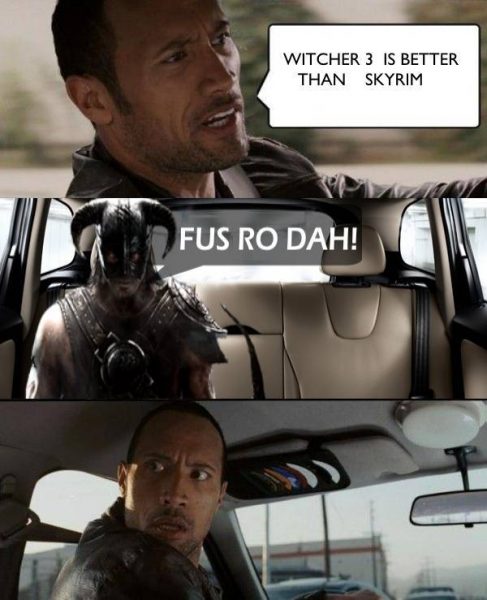 Uh oh! Looks like Dwayne Johnson messed up with the wrong guy. Fus Ro Dah is a powerful spell exclusive to Dragonborn, that summons unrelenting sonic boom force. Dwayne! You better get out of the car! 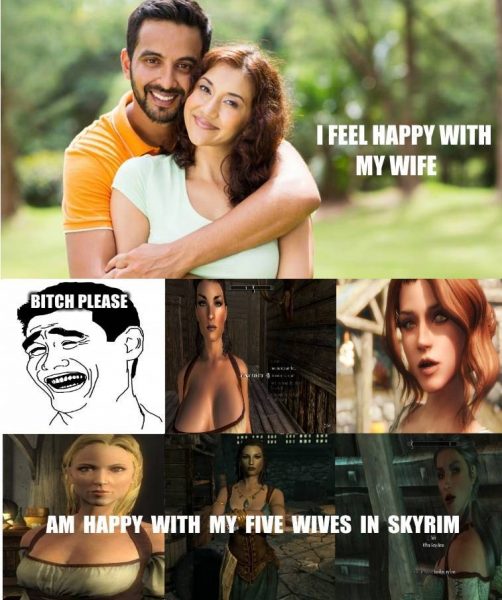 Woah! A married non-gamer, don’t ever dare to say those words to a Skyrim fan! 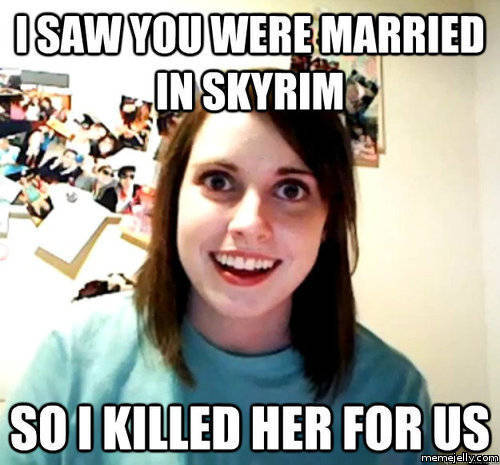 Oh…Jesus! Your wife got’ ya! You should’ve told her already! 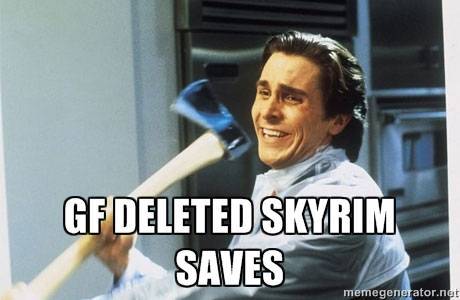 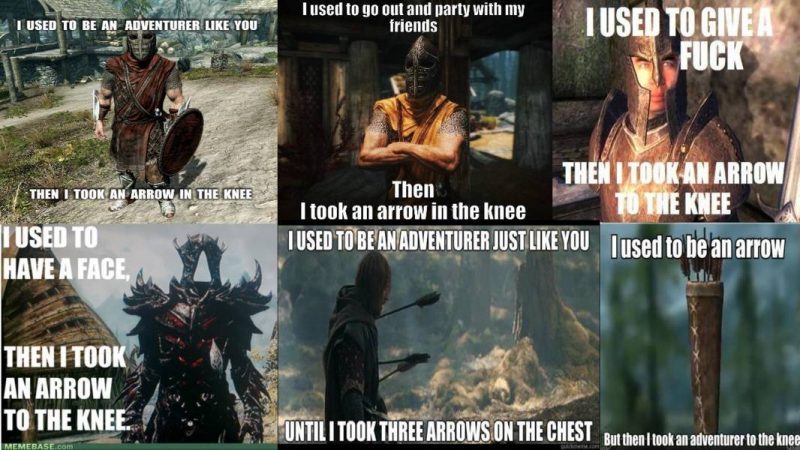 There it goes! The epic arrow to the knee Skyrim memes! Hope, you can control your laughter! 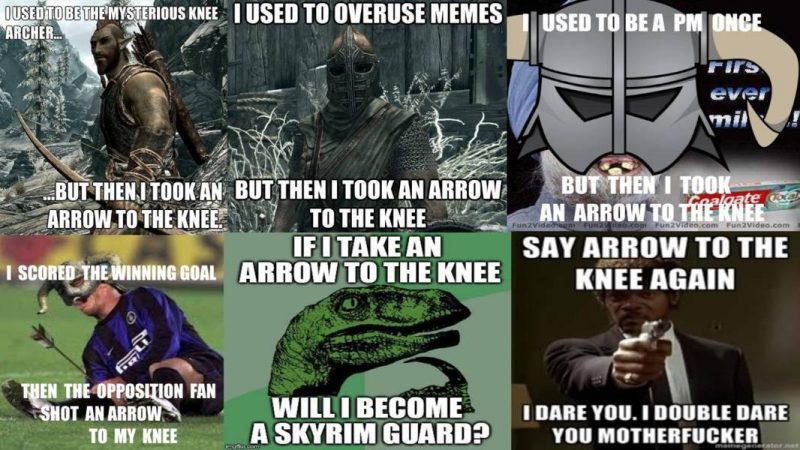 And there it goes again! Well, the third one may strike a doubt in your mind. Actually, it depicts a former Prime Minister of some nation. We won’t/can’t tell who! So, that’s for you to figure out. Oh no! Finally, Samuel Jackson has threatened everyone! But still, nothing’s stopping them…eh? 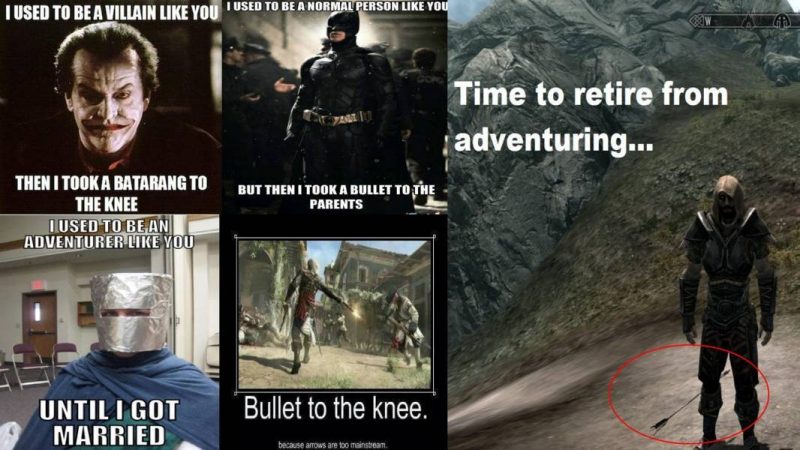 Yeah, we can see your pain. Don’t worry, that adventurer will become a Skyrim Guard!

Ah! What did you do to that poor little… sorry big creature, you selfish Dragonborn? You just killed him for powers and adding some flesh/bones to your inventory? Isn’t it? Oh poor dragon soul! May you rest in peace!

You might wanna check out this cool ‘Arrow in the Knee’ song. Please let us know if you want more articles like this in the comments section. If you do have some funny Skyrim memes that you want to share with us then please free to inform us as well.