It was not until 2016, that AMD took its first steps to establish a community stronghold within India, by initiating the ‘GAMEON’ movement. Before that, we didn’t get to see any community-reach activities conducted by the chip manufacturing giant, in the nation. Conducted annually since then by the firm’s R&D Engineers, the 2016 and 2017 editions of AMD GAMEON, meant for connecting with like-minded gaming/tech enthusiasts, were targeted for a smaller audience.

However, things all together seemed to be completely different with AMD GAMEON 2018. The event was conducted as a part of Comic Con Hyderabad during 13th-14th October at Hitex Exhibition Center respectively. It was a privilege for me and an awesome experience to attend the same, as I was invited by some of my friends at AMD. To know more, you may go through the key-highlights of the event, as described further.

Why The Dark Horse?

Some people might have been confused by discovering the term “dark-horse” in the headline of the article. Hence, to answer their questions, AMD always has been a dark-horse in the industry. Just when the firm’s competitors would announce their new jaw-dropping products, the firm would instantly reveal its secret weapon or wild-card.

Especially relevant, the company has been primarily capitalizing the marketing of its products in terms of raw-power and less flamboyance. In the tough horse-race of GPU and CPU manufacturers, this semi-conductor based giant, has delivered the unexpected benchmarks most of the times.

Similarly, the AMD GAMEON 2018, took everyone by surprise. Nobody expected the event to be so massive. Garnering a footfall of more than forty thousand (as per company claims), it was the major center of attraction at Comic Con, in terms of immersive technological experience. Especially relevant, key individuals from the company’s HQ in Santa Clara, along with staff members from different parts of the globe, came to witness and organize the event.

Connecting with the AMD GAMEON Core Team, was a privilege. “We started small with our previous events. AMD GAMEON 2018, all together, is in a different level. Based on the excitement and participation of the community in huge numbers, we would love to plan bigger initiatives in the future”, one of the senior members quoted.

Jayesh Ranjan (Secretary, Information of Technology, Government of Telengana), dropped down to inaugurate GAMEON. The key-person praised the effort of AMD for taking steps in strengthening the tech/gaming ecosystem in the State.

With PlayMax Interactive as the organizing partner, the firm also collaborated with brands namely, Sony PlayStation, HTC Vive, Corsair, AOG and Centroid. MD Computers, one of the popular hardware retailers in India, was also one of the associated partners.

The AMD GAMEON rotating structure, meant for a fancy showcase, setup quite close to the hall-entrance, was very lucrative to watch. With swords and guns blazing, which you can definitely observe from the gif below, it looked relevant to match the event theme. Looking at the rotating showcase for a few seconds, I personally felt as if, it generated a positive aura around it. What’s a better way to welcome guests and immerse them?

It was awesome interacting with with the creative team from AMD involved in its making. The team members highlighted their desire to augment the artistic look and feel of the event.

The HTC Vive VR booths powered by AMD rigs, were a major crowd puller. However, it was the Beat-Saber VR experience, that took the spotlight. People seemed to be highly excited to test their reflexes with Jedi light-sabers to match the beats, in the rhythm based game.

People also had to wait for their turn to witness a high-end gaming experience, on rigs ladened with AMD Ryzen 7 1800X/2700X processors and Vega 56/64 cards. All thanks to the 144 Hz FreeSync monitors, gamers could leverage breathtaking gameplays with augmented refresh rates.

Some of the lucrative games primarily featured in the experience zone were Assassin’s Creed Odyssey, Strange Brigade, F1 2018, Star Wars Battlefront and Battlefield 1. I got the opportunity of laying my hands on Odyssey for the first time, which rewarded me with a stunning experience.

Into Motion Capture With Centroid

The motion capture startup, Centroid, took the honors of showcasing the real-time use of the technology for efficient and accurate animations, used in movies and games. People were delighted to see, live animations portrayed by the movements of a motion-capture actor.

It was fun interacting with staff members of the firm and getting to know some interesting facts about Computer Generated Imagery (CGI).

AMD chips have already dominated the console industry, and it was really exciting to see a PlayStation zone by Sony in the event. Alongside a FIFA 2018 tournament, gamers also got the privilege to play the recently released PS4 hit, Spider-Man developed by Insomniac Games.

There was a 2-day LAN tournament specifically for CS:GO and Dota 2. There was a huge turnout for the battle-royale titles too, namely, Fortnite and PUBG. Out of 40 participants, the entity scoring the Chicken Dinner, was declared as the champion. In Fortnite, the gamer attaining the maximum kills out of three attempts, was honored with the same. The total prize-pool of these tournaments happened to 10,000 USD respectively.

The finalist in the FIFA 2018 tourney, conducted in the PlayStation zone, won a VR headset and a PS4, respectively.

Diving Into The AMD Tech

The AMD Tech Zone, specifically exhibited the practical use of various apps developed by the company, for the benefits of its users. In addition to that, I still cannot forget how one of the engineers demonstrated, jaw-dropping gaming performance with APUs (Accelerated Processing Units). Most of the hardware experts speculate, the company might eliminate the need of GPUs, in the future. 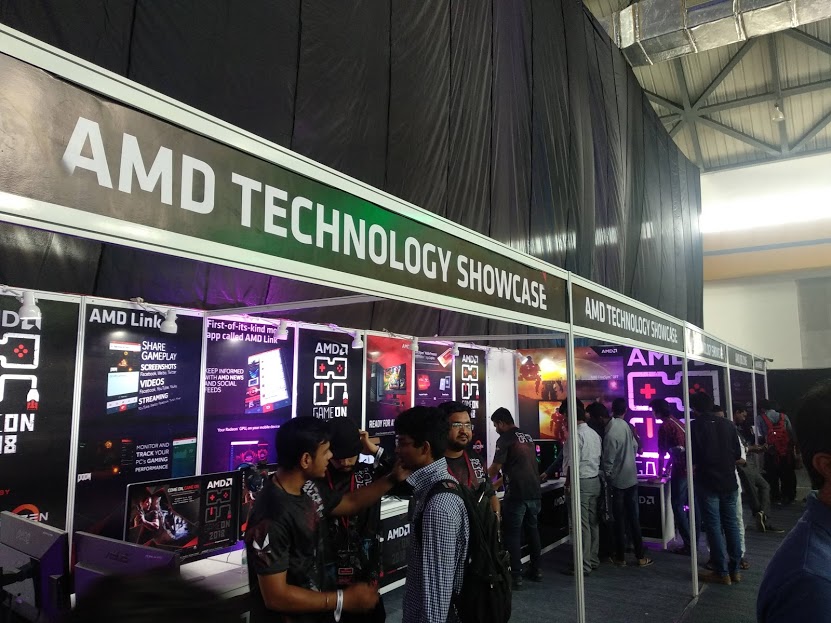 Nevertheless, coming straight to the point, you may have a read about some of the applications, showcased in the event.

The desktop app, lets users record, capture and broadcast gameplay, like any other streaming client. But on top of that, Radeon ReLive, has numerous wild-cards in its sleeve. Some of the notable features include chat-integration overlay, low latency streaming, live browser based video mixing (via Stage TEN), chroma key support, etc. 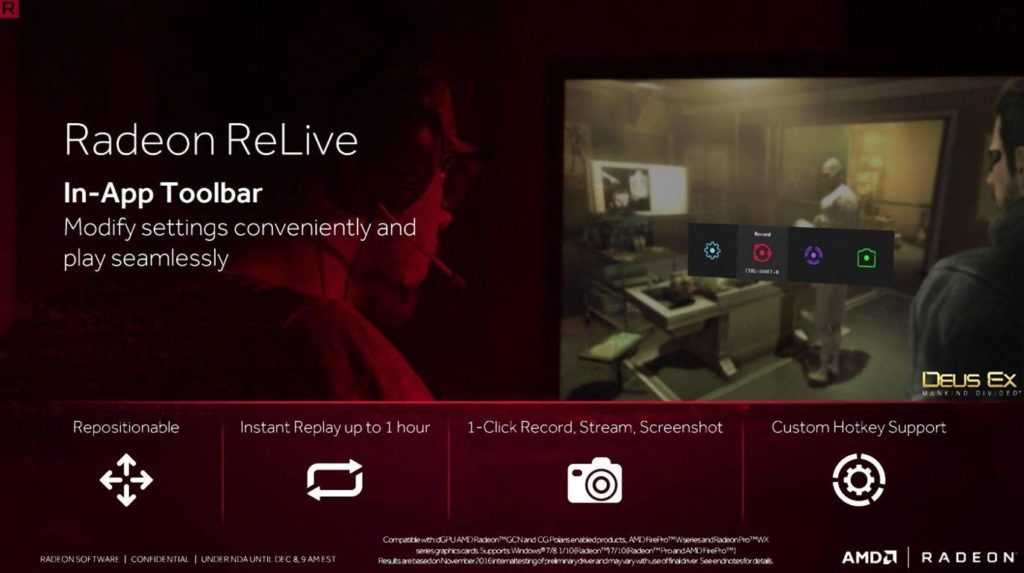 With AMD link, you can monitor your gaming performance via your phone. The performance monitor displays live feed related to resource utilization, frame-rates, etc. on the push of a button. Most noteworthy, it also facilitates the use of Radeon ReLive. In other words, you can use your phone to stream, record and capture gameplay on your PC.

It’s another user friendly desktop app that lets users tune GPU performance by adjusting its clock speed, memory frequency and fan-speed. There’s no need of any technical tinkering for the same.

This application can be a savior for people concerned about power management. Radeon Chill, dynamically adjusts the frame-rates, on the basis of your simulations in-game. You definitely don’t have to bother about your electricity bills anymore, if you game 24×7. 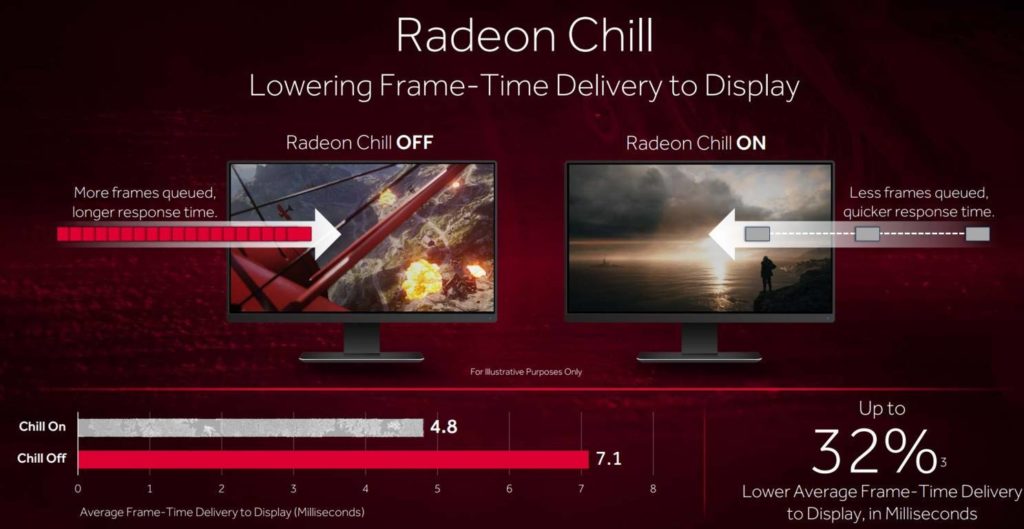 Radeon Overlay is one of the most effective, user-friendly and eye-candy tools for gamers that I personally have seen till date. All the apps that we just discussed about, can be easily accessed, in-game via the AMD Overlay. Hence, this saves you the burden of pressing ‘Alt-Tab’ in-game to implement the necessary functionalities, you desire with exclusive AMD applications.

The Radeon Pro WX 9100, definitely caught my attention, as I happened to pass by the respective booth, it was stationed in. The AMD representatives, demonstrated practical use of the card meant for R&D and high-end graphical rendering purposes. It was a delight for me to discover, the use of Radeon Pro Render in Auto Desk 3DS Max, as one of the Engineers presented a live walk-through.

Gamers were crazy to test out their driving skills with real-time car simulators. A few gulps of Red Bull, and they were off to go top-gear in F1 2017. Unlike a virtual reality experience, it rather felt much real to race on those Formula One race tracks by putting on those speed-brakes, and monitoring steep turns.

Despite the minimal participation, it was a delight to see an Iron Man armored rig, in the Modding booth. The amazing custom-liquid cooled mod, primarily featured a Ryzen 2700X processor and an RX 580, respectively.

With its R&D centers in India, setup at Hyderabad and Bangalore, AMD seems more eager to expand with a robust talent pool. It was clearly evident from the recruitment exhibit at the GAMEON. The company claims to have received more than 200 applications for various positions.

“Shortlisted candidates will definitely have a great career in the firm, by becoming a part of a team filled with dedicated and true-knowledge seekers”, one of the company representatives quoted, as I happened to communicate with the HR team.

Undoubtedly, it was one of the biggest gaming events, I ever attended. The best part was the involvement of ‘makers’ / ‘engineers’ involved in organizing the gigantic event. The execution seemed to be very uniform. AMD clearly made an example out of it. The company revealed other gaming brands its capability in terms of community development, and technology showcase. There was a huge footfall for the same.

However, they definitely could have done better in some areas. To be very specific, the lackluster in the Mod Rig Showcase, was evident from a minimal participation. On asking further about the same, the authorities told me about the repercussions. In my opinion, if something is creating hiccups, just scrap it off.

Especially relevant, engineers in the Radeon Pro booth, could have demonstrated the implementation of Machine Learning with AMD’s GPUOpen initiative. It could have been a very effective and nice addition to the event.

We all strengthen our flaws with time, and who knows, what AMD India could be planning next for a big reveal?