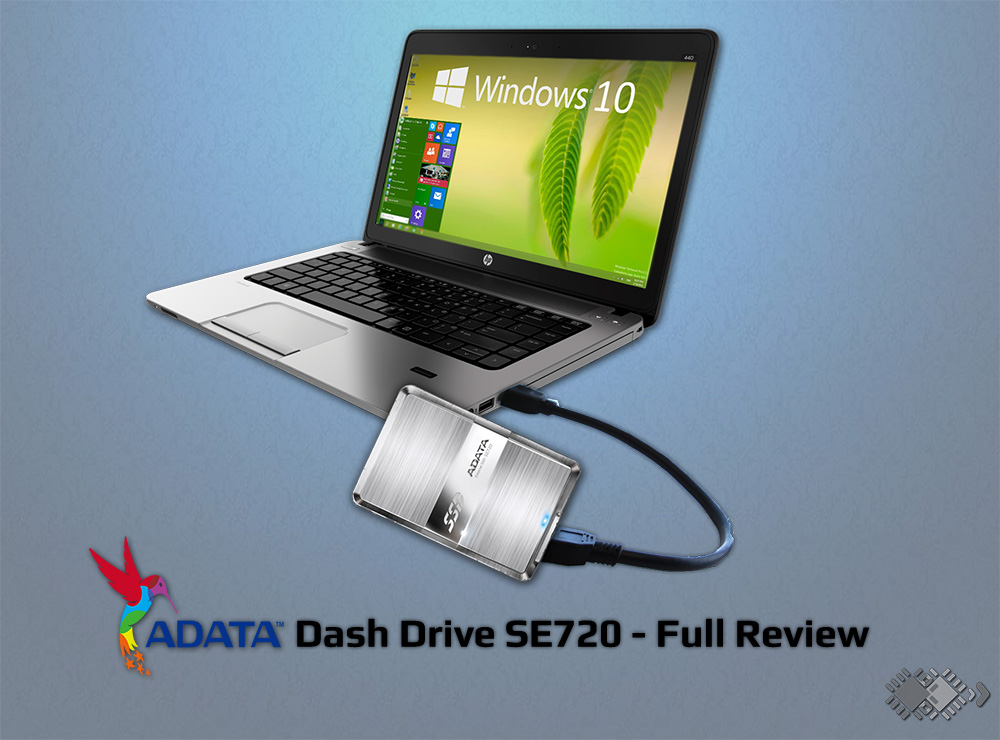 Time changes everything. Few years back we were not so familiar with the term-‘SSD (Solid State Disk)’. But with the advent of time this form of storage technology has been able to develop a craze among people, especially gamers, mainly because of its high data transfer rates. And now, a new era is emerging, as if lava in process of eruption from a dormant volcano. Though rare they have been slowly gaining public attention. We are talking about External SSDs which you may or may not be aware of, thanks to External HDDs that have dominated the storage market mainly due to their affordable cost. There are a very few branded companies like ADATA, Samsung, Transcend, etc., that manufacture these so called External SSD’s.

So, thanks to ADATA Technologies, TL got an opportunity to review an External SSD manufactured by the same company, bearing the product name-“ADATA DashDrive Elite SE720”. Woah! Woah! That’s a pretty big name. So, for our convenience, we’ll keep it short- ‘SE720’. That sounds cool enough if you pronounce 720 the same way as you do when you say Lumia 720. But is the device really elite just because the company calls it so? How is its performance? There are already other companies out there launching similar products…so why this? Don’t worry, as we will answer all your questions step by step. 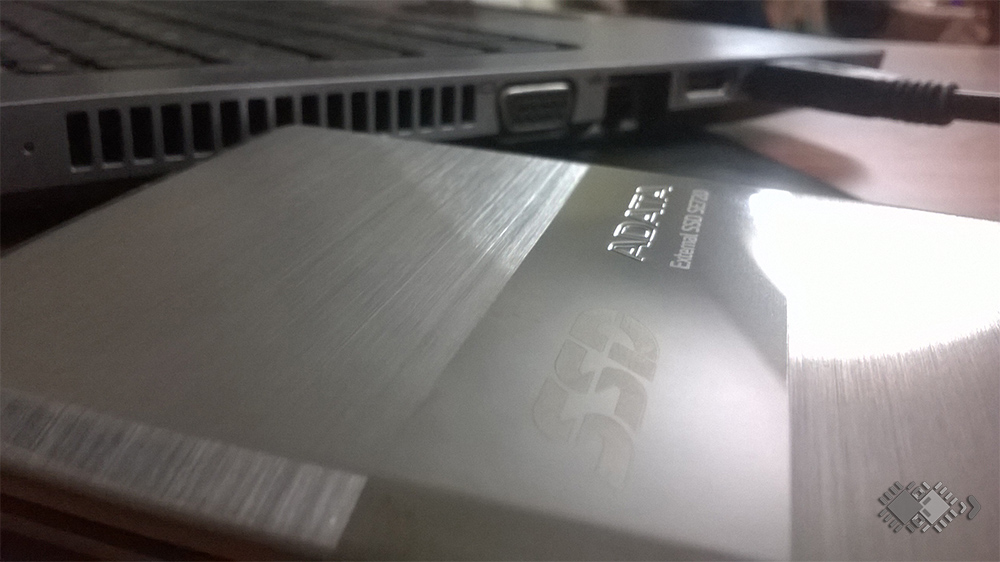 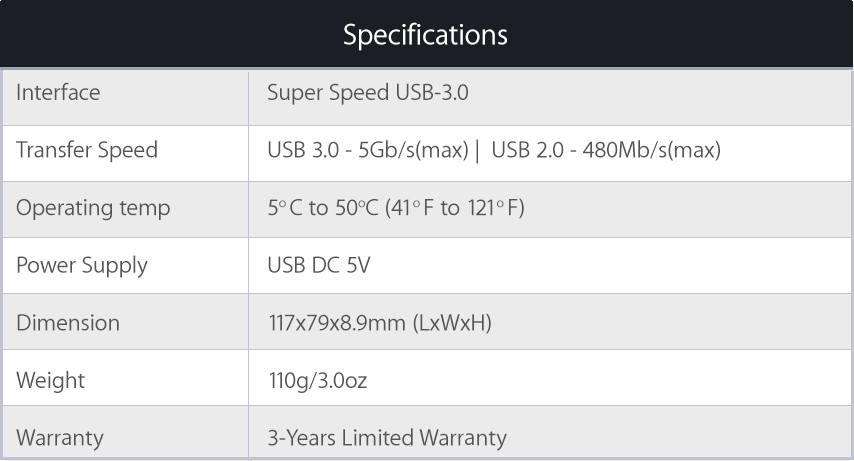 YOU MAY ALSO LIKE: GAMING BEAST: Alienware Area-51 Gaming Desktop

After unboxing the SSD, we were completely stunned by the size of the product. If you have ever used External HDDs before, you will notice the huge difference in size when you see the SE720. The cover image of the article is enough to prove the size factor of this device. Still, to justify this point we present you an image that clearly depicts the difference. 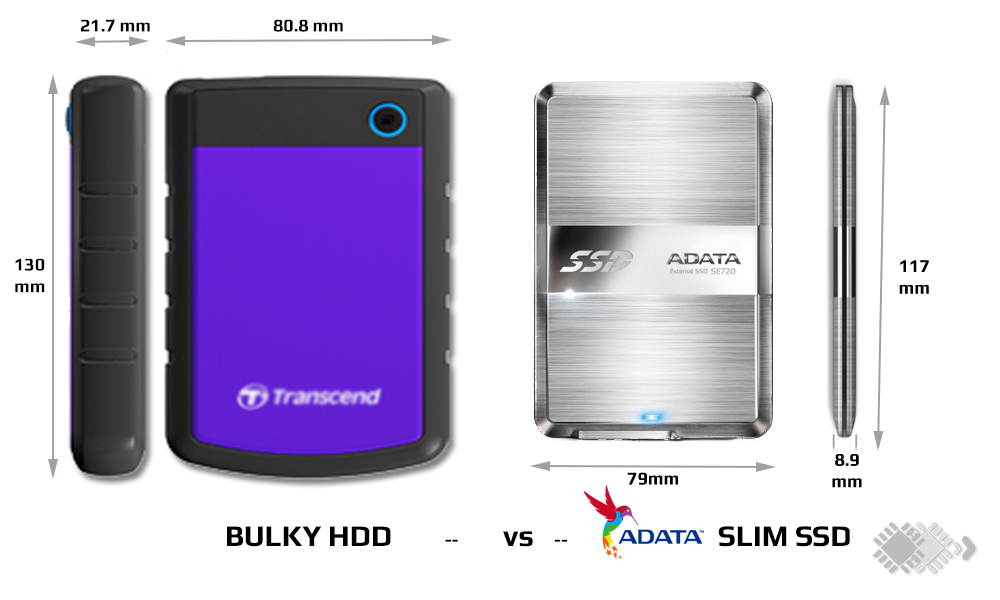 We hope that your doubt was clarified. The shiny metal body of the SSD with its ultra slim (8.9 mm thick) design almost makes you feel like holding an iPhone 6 Plus having stainless steel body, on your hands. Surely, you can use the device to play pranks on people. Just hold it near your ears and act like as if you are on a call…you will make a person almost believe that you are holding an expensive phone! 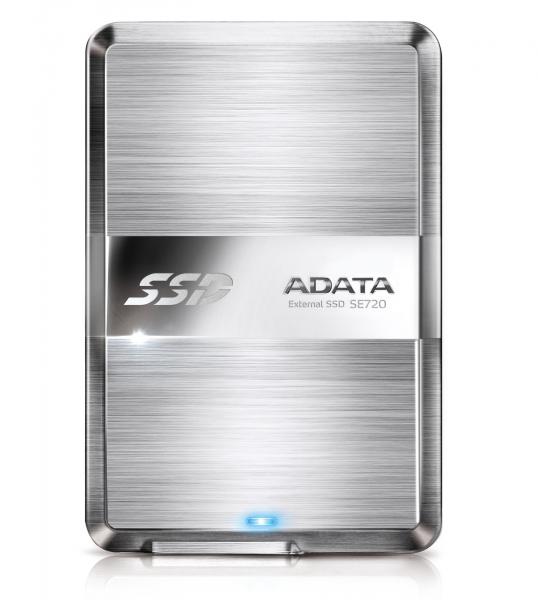 Apart from that you will find a one-touch back up button besides the USB 3.0 port. Also, there is a blue LED indicator located on the front face of the SSD.

Though the SE720 looks impressive, it may appear to be dirty later thanks to finger print marks that become almost indelible leaving dark as well as grey spots on the surface of the body. But that doesn’t matter if you are concerned about the performance of the device alone.

So, what’s in the package apart from the SSD?  Well, you will find a USB 3.0 data cable and a stylish pouch where you can fit in the SSD. Doing so, gives you the advantage of protecting the drive from drop and spill. In addition to that, there is also a quick start guide. 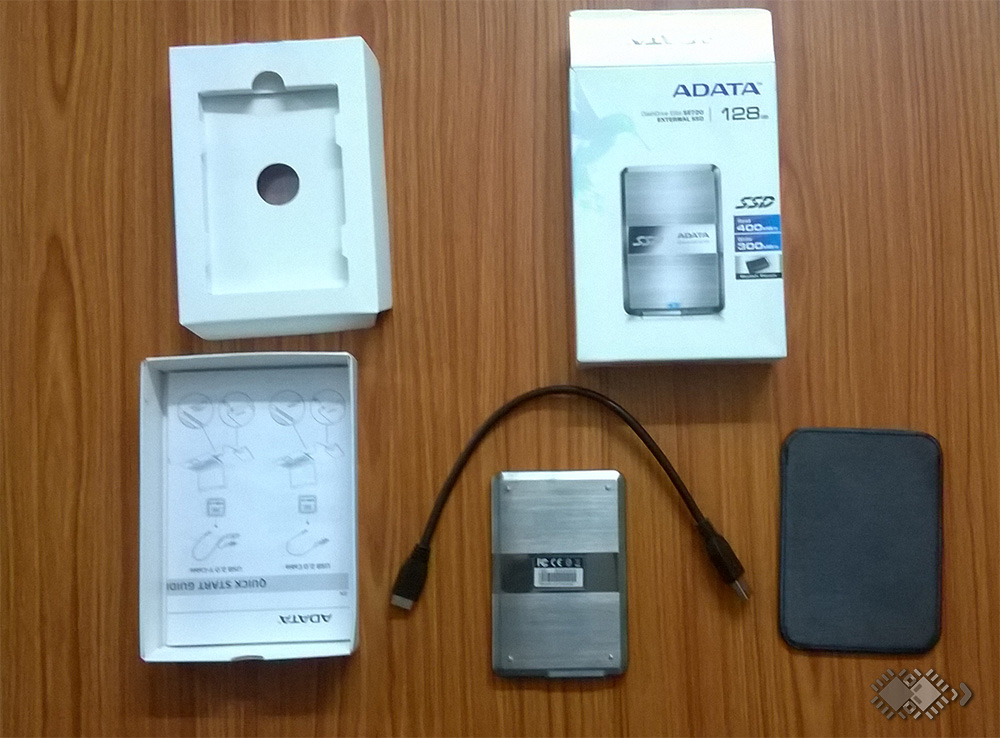 Moving to features, we’ll discuss about the functionality of the one-touch backup button first, that only works if you install the official software called HDDtoGO. As stated by the company, pressing the button backups everything crucial directly from your system to the SSD. Well, to be frank the button never worked when we pressed it several times even after installing the above mentioned official software. This happened probably due to lack of sufficient capacity in the SSD, i.e. 128 GB, which is a major flaw.

In order to boot an OS from the SSD, you need to install another official package called OStoGO. But we faced some problems while using it, as the software supports Windows 7 as the latest OS. We tried using Windows 10 Technical Preview but it did not work. So, we had to rely on WindowstoGO, the official package by Microsoft.  But to be frank these flaws do not count as we are concerned about the hardware and the performance.

Let’s come to the main part which especially decides the importance of buying any product. The company promised read and write speeds of 400 MB/s and 300 MB/s respectively. We are going to soon check that out. For our convenience, we chose a laptop to determine the performance of SE720. These are the specs of the system where we performed various tests:

The HP Probook 440 G2 uses a 500GB Seagate SSHD (Solid State Hybrid Disk) for primary storage. SSHDs combine the performance of SSDs and the cost-effectiveness of traditional hard-disks with large amounts of space. In other words, on the basis of data transfer rates, SSDs come first, SSHDs come next and HDDs come at the end. Before beginning, you actually need to format the SSD in order to convert it to NTFS from FAT32 file system. 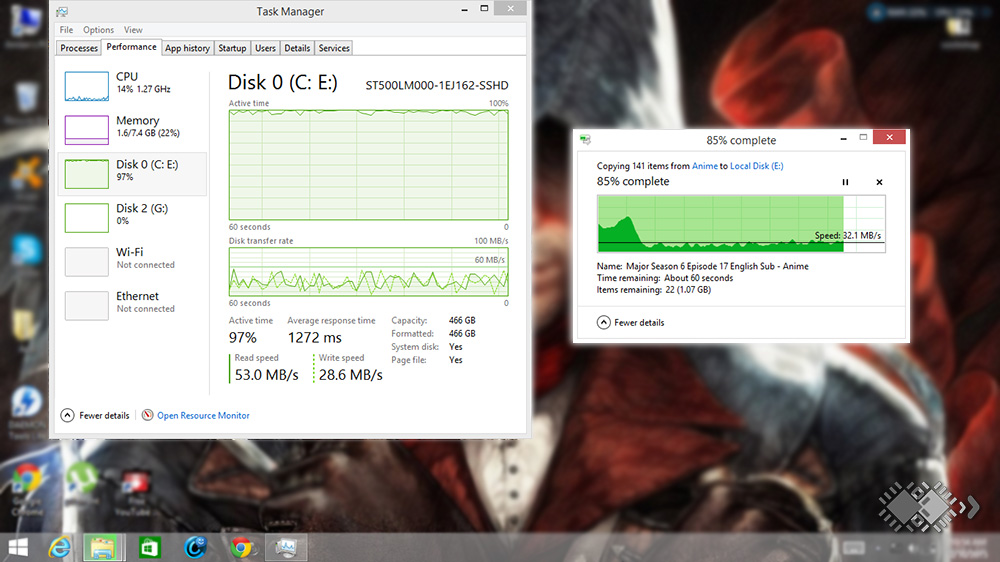 So, first we tried to compare the speed of SE720 with that of the SSHD installed in the laptop. We copied a large folder having a size of around 7GB from the primary partition to another location within the SSHD. The above image clearly depicts the speed of the SSHD that ranged between 25-35 MB/s. Later we copied the same folder from the SSHD to SE720. That gave us an average speed of 160 MB/s to be exact. You can refer the image below: 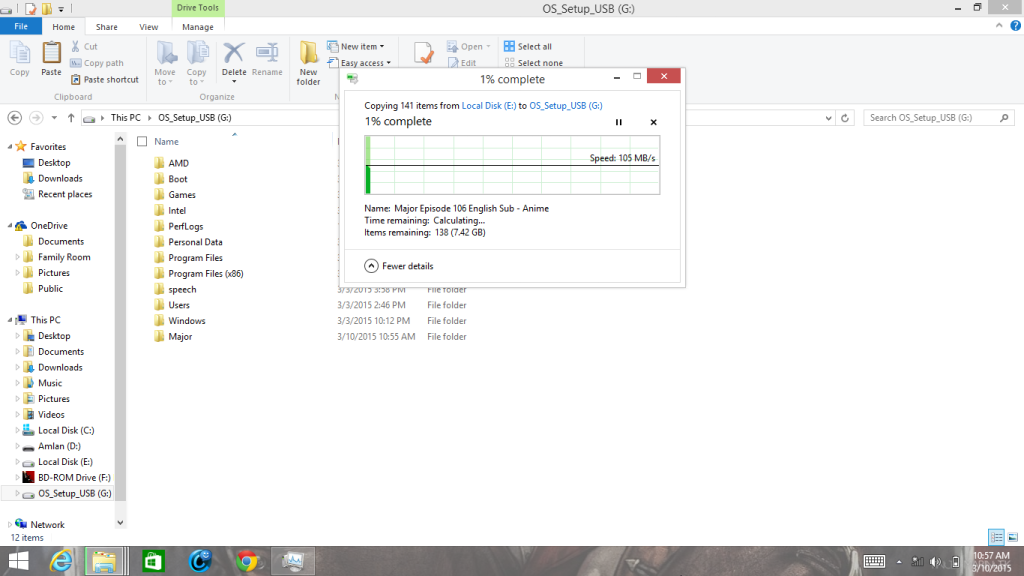 Next we tried to transfer the same folder from the SE720 to the primary partition of the SSHD. The data transfer rate exhibited a peak value of 614 MB/s. 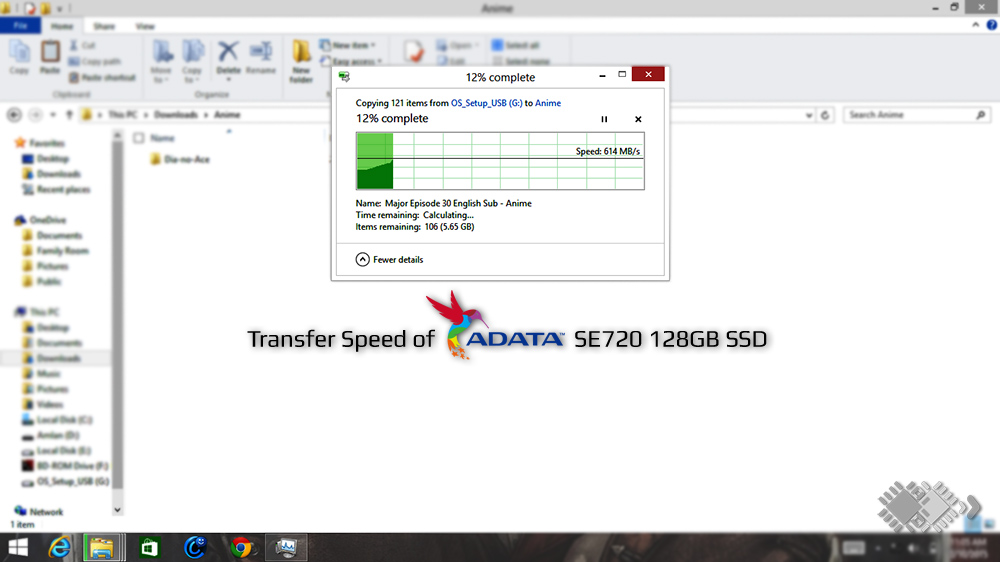 To further check the performance, we performed a speed benchmark test by using a software called ATTO Disk Benchmark. The benchmark tool exactly determines the data transfer rates under specific circumstances provided by the user. 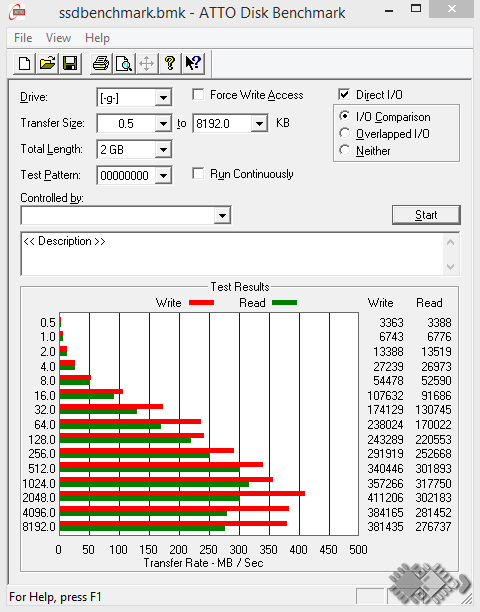 The above mentioned image showcases the sequential read and write speeds when the path length is set at 2GB. After the whole process was completed, we calculated the average data transfer rates. The write speed average turned out to be 202 MB/s while the average read speed was 163 MB/s to be exact. 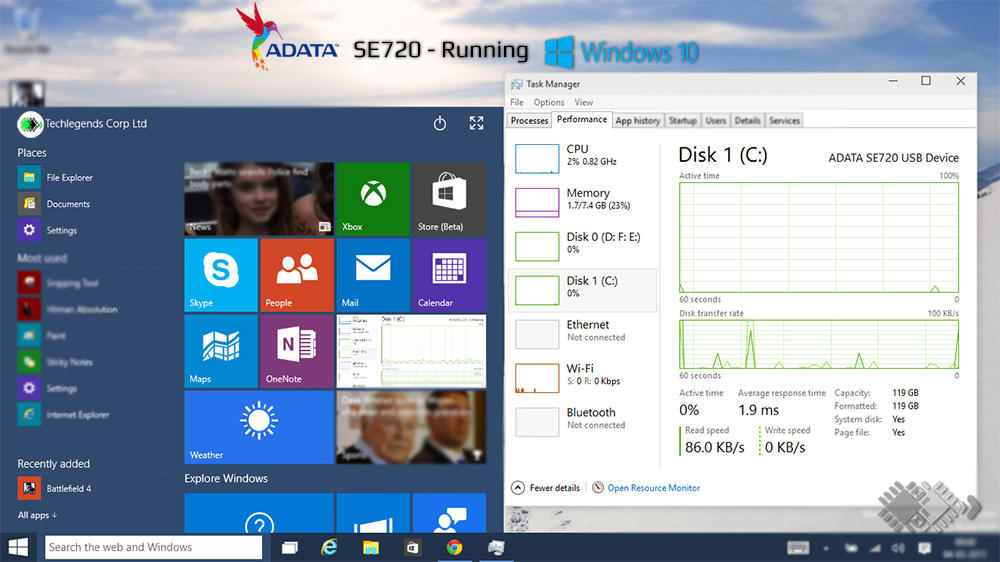 We decided to do something more as we were done with the speed test. Now this is the special part. Using WindowstoGo, we installed Windows 10 Technical Preview on SE720 to check its real potential. We ran many apps, did some gaming, some photo-editing and everything else possible to take the SSD to its limits. The result? Blazing smooth experience with lag-free performance. But running the latest Windows 10 Technical Preview and playing some games on the SSD was really a superb experience! 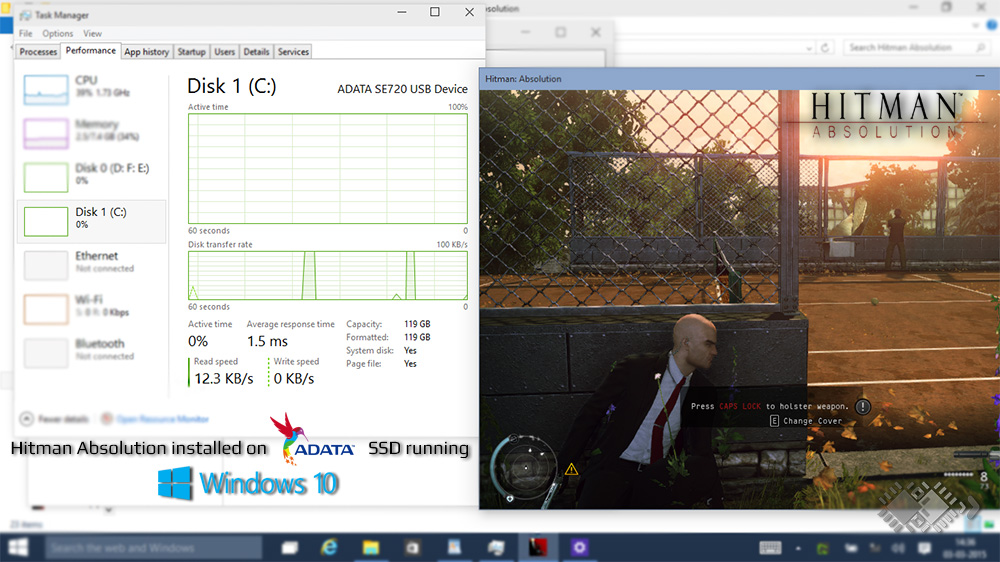 In order to check the gaming performance, we chose Hitman Absolution to run at ultra-settings.  After performing repeated benchmark tests, we discovered that the average FPS ranged between 30-40 FPS. In fact, we performed benchmark tests using the same game, on the laptop’s hard disk to determine if there was any difference in frame rate. For your info, there wasn’t any. Yes, don’t be mistaken that using SSDs for gaming would improve your gameplay experience due to an increase in frame rate. Everything remains the same. The only advantage we determined while playing the game on SE720 was a drastic decrease in loading time. Yes, that’s true for any branded and quality SSD out there. This would act like a boon for gamers who become frustrated stuck on the loading screen while playing any game.

This is also an interesting part. You may have installed any OS before on your traditional HDD. So, we tried to compare the installation time of Windows 10 Technical Preview on ADATA SE720 with that of the Seagate SSHD as well as a normal HDD. Surprisingly, it only took a matter of minutes in the case of SE720 while the installation process in the case of SSHD and the HDD took around 9 and 20 minutes to complete, respectively.

Why do people need an External SSD?

That’s actually a very logical question. With External HDDs out there, why would people spend extra cash to buy External SSDs? The only answer is speed, that matters to most of the people, especially gamers. What you can do with it? Gaming on any system with all your save files intact. You would call that GamingtoGO. Gamers who prefer to perform frequent benchmark tests on various systems don’t need to go for the hectic process of installing apps and certain games repeatedly anymore, as everything will be ready on their External SSD and can be done from there itself. 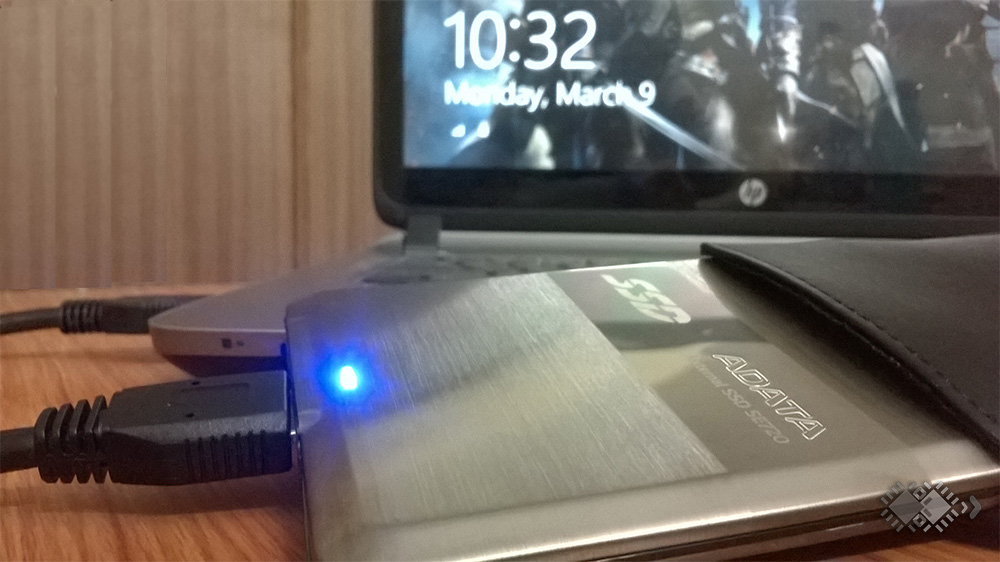 People who don’t have in-built SSDs in their laptops and want to witness lightning speed data transfer can prefer to buy these. Animators and multimedia experts who do frequent movement with their data lying around should be highly recommended to get External SSD’s as speed matters to them the most.

There are some companies that have already manufactured their own version of External SSDs. But none of them can match the quality and performance provided by ADATA Dash Drive Elite SE720 except the Transcend ESD200 Portable that is a close competitor to the former. Still, we would recommend the SE720 over ESD200 because the former has a greater build and exhibits a tad better performance than the latter. For a price tag of INR 7K, and a size of 128 GB, this seems to be very expensive for normal people who can easily purchase two quantities of 1 TB HDD, roughly at the same price. But if you are a gaming freak or someone for whom speed matters a lot and hence, frequently move with your data across various places , this would be the best deal at its price range.